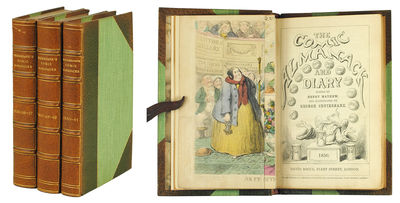 by Cruikshank, George.
London: Charles Tilt [subsequently Tilt & Bogue, and David Bogue], 1835-1853. 8 issues bound in 3 vols. 8vo. 3 folding frontispieces (2 handcolored), 70 full page plates, numerous in-text illustrations. Bound by Birdsall in half green morocco and green cloth boards, backstrips with raised bands ruled and lettered in gilt, marbled endpapers, bookplates; joints rubbed, backstrips sunned and one slightly scraped, very good. § First editions of eight issues of Cruikshank's Comic Almanack, which was published annually between 1835 and 1853. Cruikshank's Comic Almanack was the most important of a number of comic almanacks of the late Regency period which parodied and subverted the popular almanack genre to poke fun at their educational aspirations and at society at large. Contributing authors included Thackeray, the Brothers Mayhew, Robert Brough, and Gilbert A'Beckett, but the success of the Comic Almanack rested principally on Cruikshank's illustrations and editorial talents.Each part has been bound with the original wrappers and advertisements. There are some variations in the ads per Cohn's Catalogue Raisonné: 1835 with an additional 4pp. in the general pagination but with 4pp. of ads instead of 8pp.; 1847 with 8+20pp. of ads instead of 16+32pp; 1849 bound without ads. The prospectus for the Naturalist's Library with the colored plate ("often missing") is present for 1837. 1847 has been bound by error within the wrappers for 1841. 1848 is second issue. All 70 full pages plates and three folding frontispieces (2 of which are handcolored) are present. (Cohn 184.)For insight into the fads and fashions, politics and prejudices of the period, the Cruikshank's Almanacks are invaluable and perhaps understudied even now. (Inventory #: 123763)
$450.00 add to cart or Buy Direct from
John Windle, Bookseller
Share this item

London : Macmillan and Co
(click for more details about Essays of Joseph Addison.)

London : Printed for Samuel Bagster , 1815
(click for more details about The Complete Angler, or, the Contemplative Man’s Recreation.)
View all from this seller>