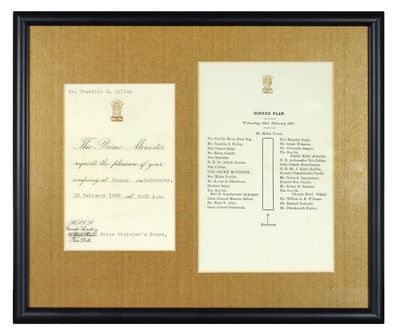 by [Kashmir]. Nehru, Jawaharlal.
New Delhi: February 1949. Printed invitation on a letterhead sheet with typewritten additions, approximately 10 x 15 cm. Printed dinner seating plan on letterhead sheet, approximately 12 x 19 cm. In fine condition, attractively framed together. Frame measures 32 x 27 cm. Not examined out of frame. Original mailing envelope for the invitation is affixed to the back of the frame in a plastic sleeve. § Carefully preserved mementos of a large formal dinner held by Jawaharlal Nehru, Prime Minister India, belonging to one of the guests, Mr Franklin Holley, a member of the United States Foreign Service. The dinner took place a year and a half after the partition of India, at a time when India was still a dominion in the British Commonwealth of Nations and the United Nations was engaged in an ill-fated attempt to mediate the dispute between India and Pakistan over Kashmir.Thirty guests are named on the seating plan; a spread of nationalities and an almost even mix of men and women. The identity of Mr Holley has proved elusive, but it is clear that many of the others present were closely involved in the question of Kashmir, including the Prime Minster of Jammu and Kashmir, Sheikh Mohammad Abdullah, Deputy Prime Minister Ghulam Mohammad Baskshi, and former Prime Minister N. Gopaliswami Ayyangar (then Nehru's Minister of Transport). Also present were members of the United Nations Commission for India and Pakistan: Erik Colban (Norway), Dr. Alfredo Lozano (Colombia), Carlos Alberto Leguizamon (Argentina), Harry Graeffe (Belgium) and the Americans J. Klahr Huddle and Robert Van de Kherchove.Other guests included Ward P. Allen, advisor to the United States delegation to the United Nations, Robert Macatee, former US Consul General in Jerusalem, and a 19 year old Lady Pamela Mountbatten.The reason for Mr Franklin Holley’s presence at this illustrious gathering is so far a mystery. The only small trace of him we have found is a short news item in the April 1950 issue of The Foreign Service Journal: "Last year Franklin Holley FSS [Foreign Service Specialist] contracted polio while stationed in New Delhi, India. He was replaced be Miss Cleo B. Hall. Now fully recovered, Mr. Holley has been assigned to Madras India. He replaces his former replacement, Miss Cleo B. Hall!" It is to be hoped that the early symptoms of polio did not spoil his dinner. (Inventory #: 124772)
$475.00 add to cart or Buy Direct from
John Windle, Bookseller
Share this item

London : Macmillan and Co
(click for more details about Essays of Joseph Addison.)

London : Printed for Samuel Bagster , 1815
(click for more details about The Complete Angler, or, the Contemplative Man’s Recreation.)
View all from this seller>