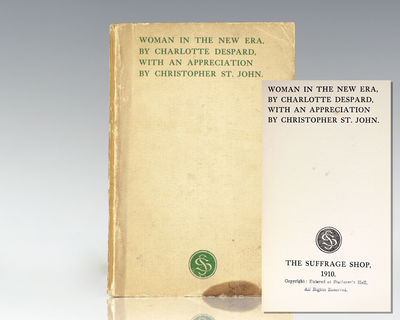 by Despard, Charlotte. With an Appreciation by Christopher St. John
London: The Suffrage Shop, 1910. First edition of Charlotte Despard's impassioned feminist tract. Octavo, original wrappers. With an Appreciation by Christopher St. John. In good condition. Exceptionally rare with no other copies traced at auction. Anglo-Irish suffragist, socialist, pacifist Charlotte Despard was a founding member of the Women's Freedom League, Women's Peace Crusade, and the Irish Women's Franchise League, and an activist in a wide range of political organizations over the course of her life, including among others the Women's Social and Political Union, Humanitarian League, Labour Party, Cumann na mBan, and the Communist Party of Great Britain. Despard was imprisoned four times for her suffragette activism, and she continued actively campaigning for women's rights, poverty relief and world peace right into her 90s. (Inventory #: 135290)
$2,000.00 add to cart or Buy Direct from
Raptis Rare Books
Share this item