GAINESVILLE: THE GREAT HEALTH RESORT OF THE SOUTH. THE BUSINESS CENTER OF NORTHEAST GEORGIA. ITS ADVANTAGES AND RESOURCES 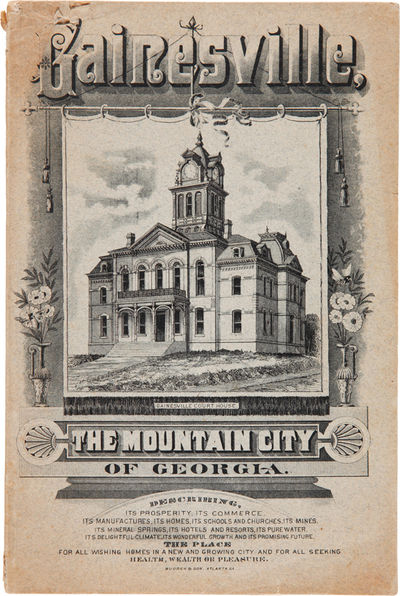 by [Georgia]
[Atlanta: Budden & Son, ca. 1890].. 68pp., including numerous in-text and full- page illustrations. Original pictorial wrappers. Wrappers slightly tanned, some damage to upper left corner of front wrapper, faint circular stamp on rear wrapper. Soft vertical crease. Internally clean. Very good. A very rare promotional booklet for Gainesville, Georgia, printed towards the end of the 19th century. Originally called "Mule Camp Springs," Gainesville began as a trading post in the early 1800s. By 1821 it was renamed Gainesville (after General Edmund P. Gaines), and was made county seat of the recently organized Hall County. The town remained small until around 1850, when it began to gather steam as a resort destination for its nearby sulphur springs. After the interruption of the Civil War, Gainesville began to grow significantly as infrastructure was rebuilt and the Richmond-Danville railroad connected it to other markets throughout the South.

This heavily illustrated promotional praises Gainesville's climate and health benefits, churches, schools, natural landscape, resources (including gold mines), and industry, and also provides statistics on various aspects of life, including cost of living and average wages. Interestingly, there are also several pages spent discussing significant Cherokee inhabitants of northeastern Georgia, including Sequoyah, inventor of the Cherokee syllabary, and George "Corn" Tassel, who was illegally executed by the State of Georgia in direct contravention of the Supreme Court's mandate. The verso of the front wrapper contains an advertisement for the Piedmont Air Line of the Richmond & Danville R.R., while the inner rear wrapper promotes the Oconee White Sulphur Springs. The White Sulphur Springs Hotel dates back to the earliest attempts to popularize Gainesville in the 1840s, and it is said that Alexander Stephens and Woodrow Wilson were among the eminent southerners who were its guests. OCLC records this rare promotional at only three institutions: the University of Georgia, Appalachian State University, and the Wisconsin Historical Society. OCLC 25685021. (Inventory #: WRCAM57632)
$1,250.00 add to cart or Buy Direct from
William Reese Co. - Americana
Share this item