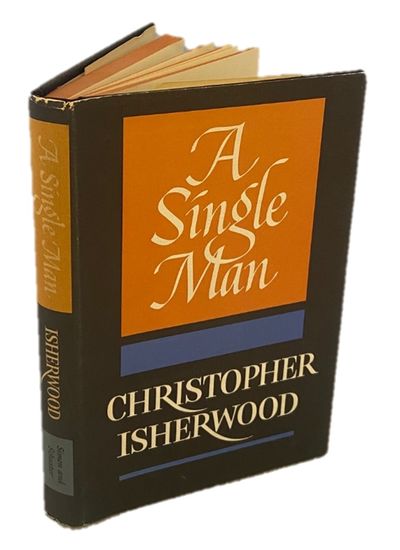 first edition
by Isherwood, Christopher
Christopher Isherwood, A Single Man. First edition. Simon and Schuster: New York, 1964. Measures 5.5 x 8 inches. 186 pages. Original dust jacket with title in attractive mid-century orange text box. Black boards with title imprinted in stylish black font. Silver title on spine. Back of jacket shows artistic black and white sketch of Isherwood. The story follows 58-year old English ex-pat George, a college professor grieving the death of his partner, Jim. Subtle and restrained with hidden feeling just beneath its surface, the book was published the same year as the Supreme Court passed the Civil Rights Act which provided the first set of protections for Americans on the basis of sexual orientation. Isherwood's portrayal of George, while spare, is deeply humanizing. A 1964 New York Times review of the book reads, "This is not the sort of novel that Christopher Isherwood's earlier works have led us to expect of him, and that is surely to his credit, for it is always interesting to see a writer branching out into something radically new rather than trying to live up to a certain kind of reputation." Very slight shelfwear to jacket. Textblock tight, bright and clean. Very good condition. (Inventory #: 18110)
$450.00 add to cart or Buy Direct from
Share this item
Max Rambod Inc.
Offered by