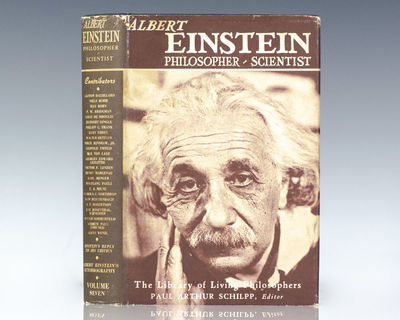 by Einstein, Albert
Evanston: Library of Living Philosophers, 1949. First edition of Einstein's singular autobiography. Octavo, original cloth, frontispiece of Einstein by Yousuf Karsh. Edited by Paul Arthur Schilpp. Near fine in a near fine dust jacket. Uncommon in this condition. Written by the man considered the "Person of the Century" by Time magazine, this is not a glimpse into Einstein's personal life, but an extension and elaboration into his thinking on science. Two of the great theories of the physical world were created in the early 20th century: the theory of relativity and quantum mechanics. Einstein created the theory of relativity and was also one of the founders of quantum theory. Here, Einstein describes the failure of classical mechanics and the rise of the electromagnetic field, the theory of relativity, and of the quanta. "The greatest physicist of the 20th century" (PMM 408). (Inventory #: 136515)
$850.00 add to cart or Buy Direct from
Raptis Rare Books
Share this item