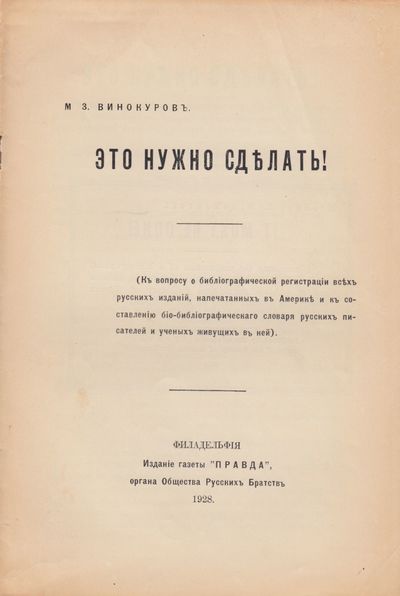 by Vinokurov, M. Z.
Philadelphia: Izdanie gazety "Pravda", 1928. Octavo (22.8 × 15.6 cm). Original printed wrappers; 14 pp. Wrappers somewhat worn and beginning to detach; still about very good. First standalone edition of this passionate call for the creation of a bibliography of Russian publications in America by Michael Vinokouroff (1894-1983), a Russian immigrant, bibliophile, and scholar, whose papers are held by the Alaska State Library. The present text, first published on the pages of the periodical "Pravda" in Philadelphia, was a result of his work at the Library of Congress: "Within the very first few days of my employment at the Library, I was quite astonished to note the extreme scarcity of Russian books published in the United States in this great National Library. But--later on, I learned that in practically no libraries in this country was this sort of material abundant, and that only very, very few of just such Russian books were received in the Library of Congress through the Copyright Office. And it was at this very time that I began to collect personally everything in published Russian in the United States that I could find..." (Catalog of his personal collection).


(click for more details about Utopia: Een Tweemaandelijks Tijdschrift voor Wetenschappelijk Amusement. No. 1 (n.d., early 1976) through 10 (September 1978) plus special boxed edition on architect J.M. Jujol (all published))
View all from this seller>