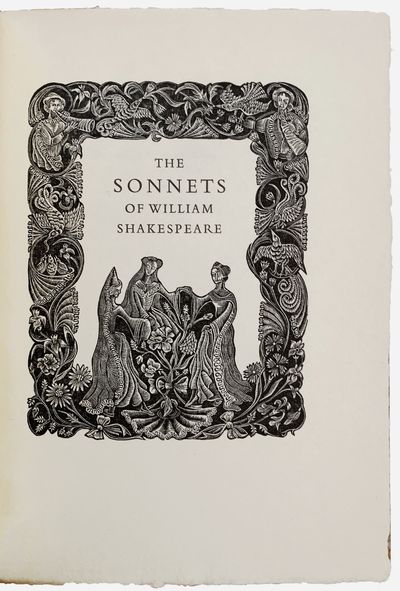 by [Plantin Press] William SHAKESPEARE.
Los Angeles:: Zeitlin & Ver Brugge Booksellers, April 1974., 1974. Sm. 8vo. 154 pp. 2 illustrations by Mary Kuper. Original binding by Max J. Adjarian in quarter Levant morocco, decorative paper (designed by the printer), raised bands, gilt spine. Fine copy. LIMITED EDITION #74 of 120 numbered copies. Printed by Saul & Lillian Marks at the Plantin Press, Los Angeles. With wood engravings by Mary Kuper. This is the rarest and most desired hand-printed work from a Southern California printer. It is notoriously rare as it was sold out on publication (Zeitlin bought out the edition and distributed it to private subscribers). It was elegantly designed by Saul Marks (1904-1974) and as a printed book it pleases with the binding, paper and illustrations. Dickover gives Marks a supreme compliment: "Los Angeles has had its share of distinguished printers; and one of them, Saul Marks of the Plantin Press, ranks as one of the greatest of the twentieth century." Some consider this Marks' masterpiece. The book was printed on the Albion Press. Saul was meticulous in his design and craft. He loved the beauty of italic type, which was used for this edition. "The letters beginning each line in the sonnets are roman; and following the typographic practice of Aldus, they are smaller in height than the lower case italic letters with ascenders." Mary Kuper was the Plantin Press's first woman apprentice. She took up wood engraving at the encouragement of Saul. See: Robert Dickover, "Saul Marks: The Great Printer," California State Library Bulletin, no. 78, Spring/Summer 2004. p.2-9; Marks, Lillian, Saul Marks and the Plantin Press: The Life and Work of a Singular Man. Los Angeles: Plantin Press, 1980; Tyrus G. Harmsen and Stephen Tabor, The Plantin Press of Saul & Lillian Marks: A Bibliography [1930-1985]. 2005. (Inventory #: LLV1813)
$3,000.00 add to cart Available from
Jeff Weber Rare Books
Share this item

A Life of Matthew Fontaine Maury, U.S.N. and C.S.N. author of 'Physical Geography of the Sea and its Meteorology.' Compiled by his daughter . . .

Turning and Mechanical Manipulation. Intended as a work of general reference and practical instruction, on the lathe, and the various mechanical pursuits followed by amateurs.

London: : Published for the author, by Holtzapffel & Co., . . . 1843, 1846, 1850, 1878, 1884. , 1843
(click for more details about Turning and Mechanical Manipulation. Intended as a work of general reference and practical instruction, on the lathe, and the various mechanical pursuits followed by amateurs.)
View all from this seller>