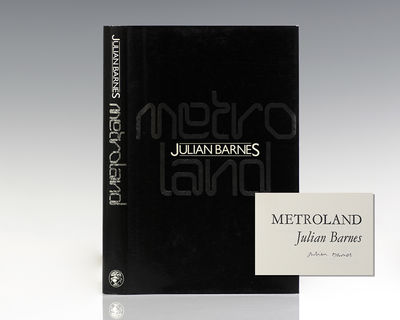 by Barnes, Julian
London: Jonathan Cape, 1980. First edition of the Booker Prize-winning author's first book. Octavo, original cloth. Signed by Julian Barnes on the title page. Fine in a fine price-clipped dust jacket. Jacket design by Craig Dodd. Author photograph by Jerry Bauer. Metroland is a first person account of Christopher Lloyd and his experiences growing up in the suburbs of London (so-called Metro-land), his brief life in Paris as a graduate student and the early years of his subsequent marriage. It is divided into three sections: I Metroland (1963); II Paris (1968); and III Metroland (1977). As adolescents Christopher and his childhood friend Toni had shown contempt for the bourgeois establishment but this lifestyle is one that Christopher ultimately chooses, much to Toni's disappointment, obtaining a secure job in publishing, marrying, buying a house and having a child. Christopher realises that his normal life and somewhat mundane marriage are not perfect, nor are they necessarily more exciting than his time in Paris with his bold French girlfriend Annick, but he does love his wife and is content. Philip Larkin wrote a letter to Barnes saying "that he had much enjoyed it, despite his prejudice against novels with people under the age of 21 in them. He added, gloomily, something like, 'but is that what life's like nowadays?'" Barnes described "this unexpected praise" as "the most gratifying moment of the strange passage of first publication."[1] Barnes' mother complained about the book's "bombardment" of filth. (Inventory #: 127617)
$350.00 add to cart or Buy Direct from
Raptis Rare Books
Share this item

Journal of Researches Into the Natural History and Geology of the Countries Visited During the Voyage Round the World of H.M.S. ‘Beagle’ Under the Command of Captain Fitz Roy, R. N.

New York : D. Appleton and Company , 1890
(click for more details about Journal of Researches Into the Natural History and Geology of the Countries Visited During the Voyage Round the World of H.M.S. ‘Beagle’ Under the Command of Captain Fitz Roy, R. N.)
View all from this seller>