DANCING IN THE WATER 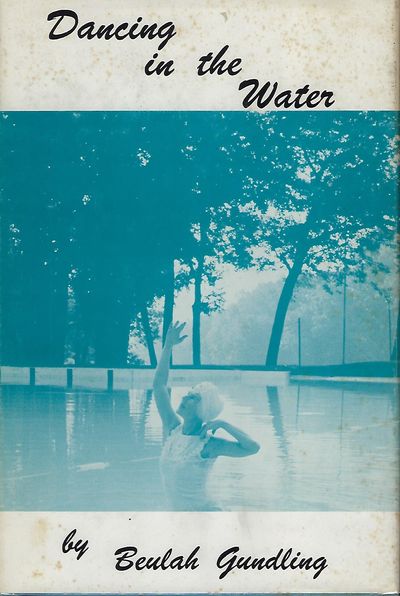 by GUNDLING, Beulah
Marion: Linn Litho, Inc., 1976. First Edition. Beulah Detwiler Gundling [1916-2003) was an American synchronized swimmer, aquatic artist, choreographer and author. This copy signed by her husband, Henry, on the front endpaper. After a long time just swimming laps in pools to be boring, Gundling began to develop her idea of combining swimming with music and dance. After studying a book about rhythmic swimming, she created a routine of swimming strokes which were set to music. On the suggestion of her husband, coach and manager, Henry Gundling, Beulah took part at the duet competition in synchronized swimming at the Outdoor Nationals in Des Moines in 1948 together with Noreen Fenner and placed 10th.[3] In the following years, Beulah increased her interest in performing solo routines, for which she designed her own costumes. She won several important competitions in North America and , took first place at the 1949 Canadian Synchronized Swimming Championships with a routine entitled The Swan after music by Camille Saint-Saëns. Moreover, she won the Outdoor solo title at the U.S. National AAU Synchronized Swimming Championships from 1950 to 1954. Gundling introduced solo synchronized swimming on an exhibition basis at the 1951 Pan American Games as well as the 1952 Helsinki Olympics, where she presented her program Thunderbird to music from the opera Natoma by Victor Herbert.[4] After winning the gold medal of the solo event at the 1955 Pan American Games, Beulah then retired from the sport. This copy is signed by her husband (which is uncommon) and comes with an additional photograph of Gundling tipped to a rear blank page; a newspaper article about the book; and a glossy promotion/order pamphlet. 8vo., blue boards, stamped in silver, in dust jacket; 253 pages. Illustrated.. Very Good (covers nice; contents clean & tight with some browning to the front endpapers). very nice (faint browning) d/j. (Inventory #: 57945)
$75.00 add to cart or Buy Direct from Antic Hay Books
Share this item
Antic Hay Books
Offered by

THE SENATOR NEXT DOOR: A MEMOIR FROM THE HEARTLAND

NY : Henry Holt & Company , 2015
(click for more details about THE SENATOR NEXT DOOR: A MEMOIR FROM THE HEARTLAND)

YOU'RE ON, COWBOY! LESSONS LEARNED FROM TAKING RISKS, TAKING NAMES AND KNOWING WHEN TO FOLD

by HODGE, Jerry. [With Ben MASTERS and Les SIMPSON]

Bloomington, IN, : Archway Publishing , 2021
(click for more details about YOU'RE ON, COWBOY! LESSONS LEARNED FROM TAKING RISKS, TAKING NAMES AND KNOWING WHEN TO FOLD)
View all from this seller>