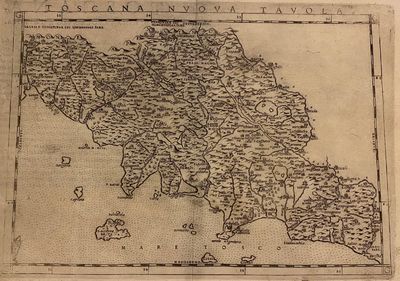 by RUSCELLI, Giarlamo
Venice: Giralamo Ruscelli, 1574. unbound. Map. Uncolored copper engraving. Venice: 1574. Sheet measures 8 5/8" x 12, image measures 7" x 9 3/4". Beautiful early map of Tuscany, extending from the Magra River to Rome. The Tevere River, or the Tiber, forms the eastern and northern border of the region on this map. The Appenine Mountains, depicted pictorially, form the northwestern border. Cities, towns, rivers, and islands are labeled. In very good condition with full original margins. Girolamo Ruscelli (c. 1504-1566) was a Venetian editor, cartographer and physician known best for his revised publication of Ptolemy's "Geographia". Published posthumously, Ruscelli added about 37 new maps to his edition, largely based on the work of Gastaldi's 1548 expansion. Ruscelli is also believed to be associated with Alessio Piemontese, who many believe was in fact a pseudonym for Ruscelli. Piemontese wrote the popular book 'The Secrets of Alexis of Piedmont'. Alessio became known as the 'professor of secrets' who had dedicated his life to the hunt natural and technological secrets. Ruscelli, as Alessio, founded the 'Academy of Secrets' along with other humanists and noblemen, which became the first known experimental scientific society and led to other such groups, including Giambattista Della Porta's 'Accademia die Secreti'. (Inventory #: 309457)
$300.00 add to cart or Buy Direct from
Argosy Book Store
Share this item