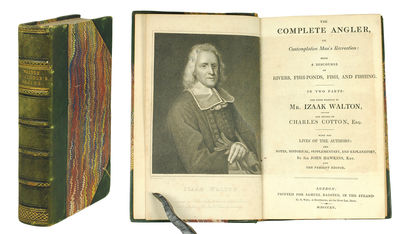 by Walton, Izaak. Cotton, Charles.
8vo. London: Printed for Samuel Bagster, 1815. 8vo, 514 pp. Portrait frontispiece, full page engravings and numerous in-text illustrations. Three quarter green morocco and marbled boards, backstrip tooled in gilt. Binding gently scuffed, joints cracked, text and plates a little foxed, leaf Bb1 with some damage and loss. Armorial bookplate of Arthur and Winifred Renshaw on front pastedown and signature of another Renshaw on front free endpaper. § A slightly worn but still pleasant copy of Bagster's second edition (the eighth overall) of the great classic of angling literature. "The great encouragement which the last Edition of the Complete Angler received, has given rise to its publication in a form which the Editor hopes will prove still more attractive. The text of the Work has been carefully collated with the Edition of 1676 (the last which was published during Walton's life); and numerous errors, which had crept in from time to time, have been corrected in it. A very considerable number of notes also have been added; together with some important corrections and additions to those of John Hawkins... New portraits of Walton and Cotton, faithfully engraved from original pictures, have been likewise added; as well as new portraits of the Fish, copied by the engraver from living subjects... At the end is an index, far more copious than has accompanied any former Edition of the Complete Angler" (Advertisement). The book is illustrated with 50 engravings, including frontispiece portraits of Walton and Cotton, 8 full-page copperplate engravings by Audinet after Wale; 6 plates by George Greig after John Linnell, 2 plates of fishing tackle and music, and numerous in-text engravings of fish. (Inventory #: 124796)
$325.00 add to cart or Buy Direct from
John Windle, Bookseller
Share this item

Sketches of the life and correspondence of Nathanael Greene, major general of the armies of the United States, in the war of the revolution.

Charleston [S.C.] : Printed for the author by A.E. Miller , 1822 2 vols
(click for more details about Sketches of the life and correspondence of Nathanael Greene, major general of the armies of the United States, in the war of the revolution.)

A State of the Expedition from Canada, as Laid Before the House of Commons, By Lieutenant-General Burgoyne, and Verified by Evidence; with a Collection of Authentic Documents... Written and Collected by Himself.

London : Printed for J. Almon
(click for more details about A State of the Expedition from Canada, as Laid Before the House of Commons, By Lieutenant-General Burgoyne, and Verified by Evidence; with a Collection of Authentic Documents... Written and Collected by Himself.)
View all from this seller>