Fascists at Olympia: A Record of Eye-Witnesses and Victims 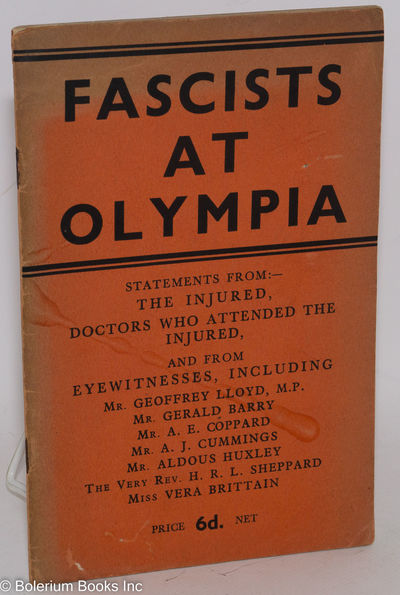 by Vindicator, compiler
London: Victor Gollancz, 1934. Pamphlet. 48p., stapled wraps, 5.5x8.5 inches, staples heavily rusted, wraps toned along edges, front wrap has a few spots of silverfishing and a large splash stain that extends through to the first page, else good condition. Eyewitness accounts of the meeting of Oswald Mosley's British Union of Fascists at Olympia Stadium, during which BUF members beat anti-fascists who attempted to disrupt the meeting. Includes statements from Vera Brittain and Aldous Huxley. (Inventory #: 288565)
$95.00 add to cart or Buy Direct from Bolerium Books
Share this item