Colonial Grandeur in Philadelphia: The House and Furniture of General John Cadwalader 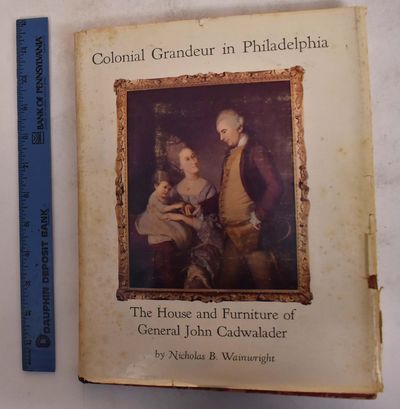 by Wainwright, Nicholas B.
Philadelphia: The Historical Society of Pennsylvania, 1964. Hardbound. VG-/Good (heavy wear to dust jacket, price sticker remnants on rear of dj, creasing/warping to back cover of dustjacket from a seam-like tear that was repaired with tape; tape is applied to interior). Red marbled cloth covered boards, with black cloth title block and gilt letters on front cover; white & color illustrated dust jacket, maps on flyleaves, xii, 169 pp., many bw plates. "An account of how a great Philadelphia mansion was decorated and furnished in colonial times. Based on documentary evidence, this story takes the reader inside General Cadwalader's house and gives him a concept of the appearance of a residence said to have been the grandest and the most magnificently furnished in the city. Scores of Philadelphia's master craftsmen had a share in its ornamentation. The narrative includes a description of those who lived in the house and traces what happened to its precious contents, that unrivaled collection of furnishings which so perfectly complemented the General's sumptuous parlors and chambers." (dj) With a foreword by Henry Francis Du Pont. Of 2000 Copies. (Inventory #: 105039)
$35.00 add to cart or Buy Direct from Mullen Books
Share this item