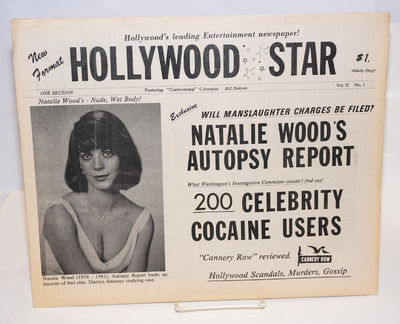 by [Wood, Natalie]
[Los Angeles]: the tabloid, 1981. 32p., b&w tabloid folded once to 14 x 11.5 inches with a faint second fold now flattened out. Material on Wood occupies four full pages : One full page each for standard dorsal and ventral autopsy outlines with injuries noted handwritten by coroner Thomas Noguchi. Another smaller facsimile ("medication & evidence record") and four closely-printed columns of text. And a three-quarters column on p.3 of what it was like for the Star reporter at the coroner's press conference. Plus of course the front page headline with photoportrait, this captioned "Autopsy report backs up theories of foul play". Nice copy, mailed flat. The Star theory, promulgated in a captioned cartoon, is that somebody punched her in the face ("a mis-guided punch") which it is asserted conforms with a facial contusion noted by Noguchi. [This cataloguer will remind the reader that foul-play was not established. But then Noguchi had trouble arguing the inarguable powderburns behind RFK's right ear.] // Other articles include a lengthy treatment of the murder of a local noncelebrity bartender, a long list of male film stars who are gay or who have had same-sex experiences, another long list "200 celebrity cocaine users," review of Cannery Row, &c &c. (Inventory #: 117264)
$25.00 add to cart or Buy Direct from Bolerium Books
Share this item