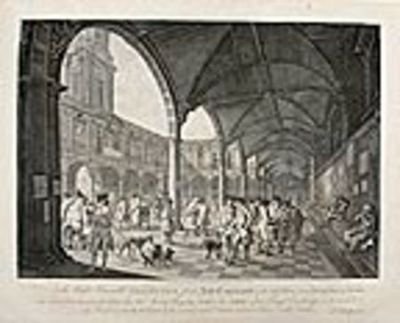 by BARTOLOZZI, Francesco (1727-1815, engraver) - after J. CHAPMAN and LUTHERBURGH
London: published & sold by Mr. Chapman, 1788. Copper engravings by Bartolozzi after Chapman & Lutherburgh. Expert restoration to margins. Sheet sizes: 18 3/4 x 23 inches and 19 x 23 3/8 inches. A famous pair of engravings of the second Royal Exchange by Bartolozzi, one of the greatest engravers of his age. The first image is of the exterior on Cornhill, the second of the interior.

There have been three Royal Exchanges, each of which in their heyday were at the heart of what the City of London does best: commerce. The first, based on the Antwerp Bourse was built at the expense of Sir Thomas Gresham in 1565 (the Grasshopper on the top of the present Exchange recalls Gresham's family crest). The site was provided by the Corporation of the City of London and the Mercer's Company. Roughly triangular, it is formed by the converging streets of Cornhill and Threadneedle Street. The present image is of the second exchange. Built on the same site after the Great Fire of London, designed by Edward Jerman and opened in 1669. This too was destroyed by fire on 10 th January 1838. The present exchange, still at the heart of the City of London, built to a design by Sir William Tite was opened in 1845. Heywood's lines about the first Exchange are equally apt for the second: "Not in my life; yet I have been in Venice, In the Rialto there, called Saint Mark's; 'Tis but a bauble, if compared to this. The nearest, that which most resembles this, Is the great Burse in Antwerp, yet no comparable Either in height or wildeness, the fair cellarage, Or goodly shops above. Oh my Lord Mayor, This Gresham hath much graced your city, London; His fame will long outlive him." (Thomas Heywood If You Know Not Me, You Know Nobody part 2). (Inventory #: 19913)
$2,250.00 add to cart or Buy Direct from
Donald A. Heald Rare Books
Share this item
Donald A. Heald Rare Books
Offered by