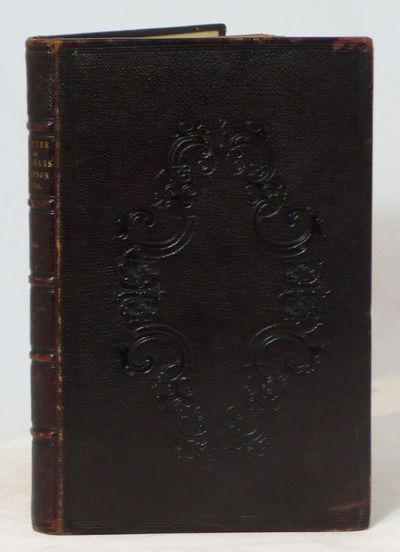 by HOUSMAN, MRS. CATHERINE
London: Printed by Hughes and Robinson, 1848, 1848. First edition. OCLC records four copies (Duke, Columbia and London Library). Ex-library markings at the foot of the title-page; edges a little rubbed; fine copy.. 8vo, contemporary (probably original) purple morocco, decoratively blind-stamped, gilt lettering, a.e.g. 16 plates (eight color). Â¶ An elaborate attempt to defend a literal interpretation of the Bible in the form of an eccentric attack on Charles Empson, who had apparently traveled to Egypt and had written about his findings there in connection with the scripture. Several of the plates are finely hand-colored renditions of Egyptian motifs, and the remaining plates are fine etching of Biblical scenes. Â¶ About Mrs. Housman not a great deal is known, other than she was from Bath and published several other titles on similar themes (including such works as A Writing or Declaration from the Law Book, to Obliterate the House of the Revolver, or Solar System [1821] and Letter to Dr. Spry in Vindication of the Word of God Against Every Specimen of Scientific Opposition [1839]). (Inventory #: 21874)
$250.00 add to cart or Buy Direct from
Brick Row Book Shop
Share this item

A Coney Island of the Mind. Poems by Lawrence Ferlinghetti. Portraiture by R. B. Kitaj

San Francisco: The Arion Press, 2005 , 2005
(click for more details about A Coney Island of the Mind. Poems by Lawrence Ferlinghetti. Portraiture by R. B. Kitaj)

Two Consolations . . . With an Excerpt from Una Jeffers' English Journal

(San Mateo, Calif.: The Quercus Press), 1940 , 1940
(click for more details about Two Consolations . . . With an Excerpt from Una Jeffers' English Journal)
View all from this seller>