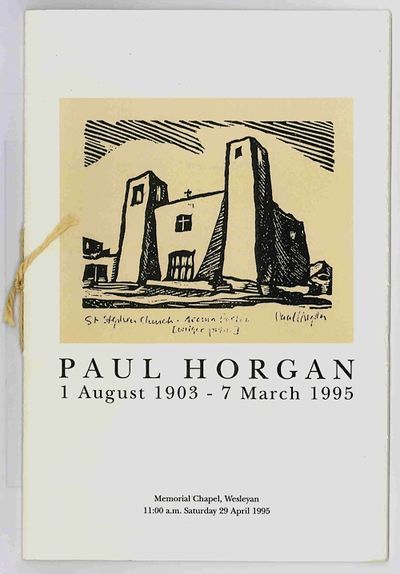 by [Wilbur, Richard, et al.]
[ Middletown, CT], 1995. Sewn pictorial white wrappers, featuring a reproduction of a linoleum cut by Paul Horgan of the church at Acoma. Fine. First edition, signed issue, of this booklet commemorating the memorial service for Paul Horgan held in Middletown on 29 April 1995. Contributors to the text in the form of their addresses or messages to the gathering include Richard Wilbur, Daniel Patrick Moynihan, David McCullough, Alison Henning, Stephen Alter, Frank King, Douglas Carter, Robert Giroux and Colin G. Campbell. From a total edition of 200 copies printed after a design by Joseph Reed, this is one of thirty- five copies designated with letters, and signed by some of the participants: Wilbur, Henning, Giroux, McCullough, Moynihan and Campbell. (Inventory #: WRCLIT58412)
$50.00 add to cart or Buy Direct from
William Reese Co. - Literature
Share this item

A PLACE ON THE MAGDALENA FLATS A PLAY IN THREE ACTS

[Dallas : The Author] , 1975.
(click for more details about A PLACE ON THE MAGDALENA FLATS A PLAY IN THREE ACTS)

Barryton, NY : Open Book , [1981].
(click for more details about HINES / FABRIC AND TENSION)
View all from this seller>