Jack Kennedy and the Nauru intelligence 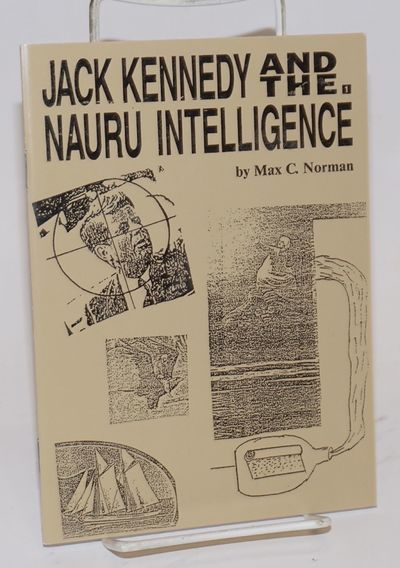 by Norman, Max C.
Melbourne Australia: author, publishing as A South Pacific Epiphany-Genie Condor Book, 1993. 44p., staplebound cardstock wraps, faintest signs of any handling or age. This copy is signed by author opposite title page. "Soon after Christmas, 1947, I was on Long Island, at a spacious estate near the sleepy village of Northport. I refer to the institution as F.E.E.F., which I understand to mean 'Federal Establishment Experimental Facility. I stayed there for nine and a half years, undergoing brain-washing and mind-control treatments. It was a safe-house for the C.I.A., which used it as a testing-ground for every type of conspiracy, including countless assassinations. The superintendant was Dr. Schillinger. The person who supervised F.E.E.F.'s activites was Dr. Zobel, the Director of Continuous Treatment." There was also a Dr. Danzig. Norman says he and others were subjected to ultra-sonic noise accompanied by God's voiceover ("now brace yourselves, here comes Theophany"). Interesting stuff but told all too briefly; the bulk of Norman's text involves his pursuit of James Michener who plagiarized his, Norman's, WWII-era South Pacific manuscript. (Also plagiarizing him were Oscar Hammerstein and Colleen McCullough, spelling her name McCulloch.) Sandwiched into this saga are briefly-told experiences with a few JFK assassination figures, such as "Ralph," who was "in M K U L T R A at F.E.E.F. [for] many years; he was called "the Shock Trooper" or "the Enforcer". Ralph was assigned as a leader of the Core Conspiracy Team to extinguish, by force and fear, any outward signs of opposition to the Assassination Conspiracies among the M K U L T R A subjects" (but the pix Norman reproduces of Ralph are the familiar sketches of Maurice Bishop / David Atlee Phillips). Find two pages about the stripper Candy Barr who knew Jack Ruby and Mickey Cohen and that JFK would die; plus a little on "the man in Mexico City who impersonated Oswald" [the usual surveillance photos are reproduced] who was likewise on the staff of FEEF and who "used the code name Mr. Condor." Find text of a letter sent to Carl Oglesby and his account of conversations with Anthony Summers. Unfound, though skimming studiously for it, is what the heck Norman means by the "nauru" in his title. (Inventory #: 118806)
$50.00 add to cart or Buy Direct from Bolerium Books
Share this item