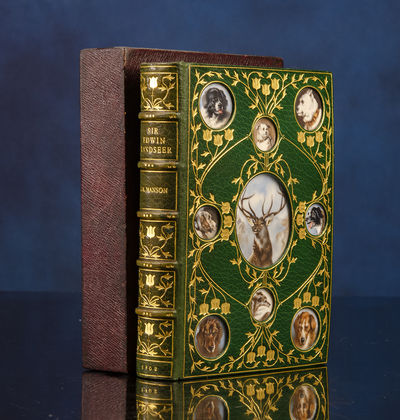 Handsomely bound ca. 1904 in a full dark green levant morocco Cosway Binding by Rivière & Sons for Sotheran & Co., stamp-signed to front turn in. Spine with five raised bands decoratively tooled and lettered in gilt after a floral and leaf design in compartments ruled in gilt. The front and back covers are ruled and decoratively tooled in a gilt floral and leaf design, surrounding ten oval/round miniature paintings under glass. Nine miniatures on the front cover depict eight hunting dogs around a stag; the miniature on the back cover is a portrait of Sir Edwin Landseer. Board edges double ruled in gilt, with turn-ins ruled and decoratively tooled in gilt. Green marbled endpapers. Joints expertly and totally invisibly repaired. A fine copy. Housed in the original burgundy roan slipcase.

An outstanding, quite beautiful example, both for the quality and quantity of the miniatures. The upper cover includes nine insets based upon one of Landseer's favorite themes, the stag hunt.

This binding is almost identical to one that was sold at the HRH The Prince Henry, Duke of Gloucester sale Christie's London January 26th, 2006, lot #754 (£13,200/$23,630). That example was referred to in Stephen Ratcliffe's Hidden Treasures... "The first Cosway Bindings were apparently produced in 1901/1902 - the important Sotheran catalogue issued for the season 1909/1910 uses the words "invented eight years ago". It was further stated that "nearly all the examples were sold as quickly as it was possible to produce them; hence comparatively few specimens have been catalogued, or in fact seen by the general public". The first Cosway binding I have traced was sold in the late HRH Duke of Gloucester sale at Christies London 26/27th Jan 2006. This is Manson, J.A. "Sir Edwin Landseer RA". Published 1902. Bound by Rivière in dark red morocco with large central miniature and eight circular ones on the front cover and one on the back cover - a total of 10 miniatures. This binding can be dated by the presentation inscription "Frederick von Eckstein from his wife Catherine. Christmas 1904".

In the first decade of the twentieth century, the London bookselling firm of Henry Sotheran & Co., introduced a type of binding that was decorative, had historic associations, and catered to the level of quality expected by connoisseurs at the time. Between 1902 and 1903, John Harrison Stonehouse (1864-1937), managing director of Sotheran's, created what came to be referred to as "Cosway bindings." These were named after the celebrated eighteenth-century English portrait miniaturist Richard Cosway (1742-1821). Cosway bindings are distinguished by their attractive, finely painted miniatures on ivory that are protected by glass and inset into the covers or doublures (inside covers) of elegantly tooled books. Stonehouse's success with the bindings was due in part to his employment of skilled miniaturist, Miss C. B. Currie. It has been estimated that Miss Currie painted several thousand miniatures, recognized for their delicate rendering and precision, for over nine hundred bindings before her death circa 1940. For many of the more lavish Cosway bindings, Currie painted multiple portraits. Occasionally, landscapes and other subjects adorn the covers or doublures. To enhance Currie's miniatures, Stonehouse arranged for the London firm of Rivière & Son to produce a variety of high-quality single-volume bindings. One of the best large-scale binderies active in the first quarter of the twentieth century, Rivière & Son integrated the miniatures into bindings for both previously published editions and new works. Stonehouse marketed Sotheran's finished Cosway-bound volumes primarily to booksellers in the United States or to American agents. Before Sotheran's 1911 catalogue, in which they identified the miniature artist as Miss Currie, the miniatures are attributable only by their recognizable style. By 1913, the bindings are distinguished by a limitation statement on a colophon leaf (where a publisher's emblem or trademark is placed), which provides the number of the Cosway binding with facsimile signatures of Stonehouse and Miss Currie. The customary gilt-stamped signature on the turn-in is generally lettered: "Bound by Riviére & Son from Designs by J. H. Stonehouse" and "Miniatures by C. B. Currie." Competitors, intrigued by the marketing potential of Sotheran's Cosway volumes, began copying the bindings soon after their initial introduction. Although the fashion for Cosway bindings diminished after World War II, the London binderies of Sangorski & Sutcliffe and Morrell continued to produce morocco-bound volumes with inset miniature paintings. Perhaps the most prolific follower has been the still existing English firm of George Bayntun, who acquired the Rivière stock of binding tools in 1939.

This biography of Sir Edwin Landseer, R. A., the most popular British artist of his day, is one volume in a series entitled The Makers of British Art, edited by James A. Manson. Already an accomplished artist of animals and nature," in 1824, Landseer visited Sir Walter Scott at Abbotsford. The visit to Scotland had a great effect upon Landseer. That country with its deer and its mountains was thenceforth the land of his imagination. He began to study and paint animals more in their relation to man....he contrasted opposite classes of society as reflected in their dogs--the aristocratic deerhound and the butcher's mongrel....Having no check in his success, artistic or social, he made his way into the highest society, and became an intimate and privileged friend of many a noble family...in 1839 he painted his first portrait of the queen, which was given by her majesty to Prince Albert before their marriage. At the palace he was hereafter treated with exceptional favour. From 1839 to 1866 he frequently painted or drew the queen, the prince consort, and their children....He painted also her majesty's gamekeepers and her pets." In one of his most famous portraits, 'The Connoisseurs' (1865), he renders himself sketching, with a dog on each side of him critically watching his progress. The group portrait is reproduced in this volume as the frontispiece, the original having been presented to the Prince of Wales (afterwards, King Edward VII). He produced many fine sporting and hunting scenes, the subjects of numerous engravings, further popularizing his work. (DNB, p. 506-508).