German Scenery From Drawings made in 1820, By Captain Batty, of the Grenadier Guards, F.R.S. 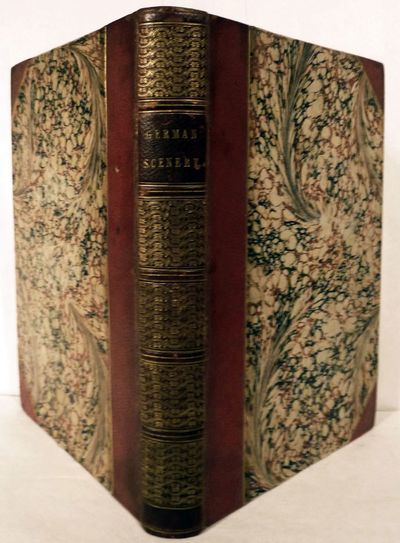 by Batty, Captain Robert
London: Rodwell & Martin, 1825. First edition. Contemporary half red morocco and marbled boards. Aeg. Near Fine. Unpaginated. 27 1/2 x 18 1/2 cm. Sixty-two steel plates (with tissue guards), including vignette title and frontispiece, engraved by Heath, Owen, Lacey et al. Plate Index . Bound without letterpress title. Each plate described in English (recto) and French (verso). Batty served with the Grenadier Guards in the campaign of the Western Pyrenees, and at Waterloo. "He was an artist of considerable merit (he published view books of French, German and Welsh Scenery and Scenery of the Rhine, Belgium, and Holland) .....all of which have been much esteemed." [see: BRYAN, Vol.I, p.95]. Moderate toning to first few leaves, plates and text generally bright and clean, slight extremity rubbing, raised bands, spine panels richly gilt. (Inventory #: 18464)
$600.00 add to cart or Buy Direct from
Roy Young Bookseller
Share this item
Roy Young Bookseller, Inc.
Offered by

Ancient Chinese Ceramic Sculpture From Han Through Tang; The Collection of Mr. and Mrs. Ezekiel Schloss -- Vol. II only

New York : Abrams , 1975
(click for more details about Francis Bacon; Translated by John Shelpley)
View all from this seller>