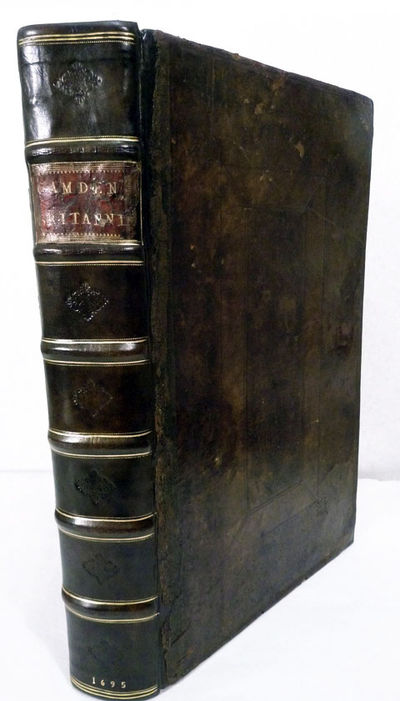 by Camden, William
London: F. Collins. for A.Swalle & A. & F. Churchil, 1695. leather_bound. Contemporary panelled calf decorated in blind, rebacked with original red leather spine label laid-down. Near fine.. 1116, (18), (26) pages.[*1, A2, a-g2, B-Fff4, Ggg4,*Ggg2, Hhh4, *Hhh2, Iii-Mmm4,Nnn-Nnnn2, a-l2]. Frontispiece, fifty double-paged maps by Robert Morden, nine plates of maps, and a host of engravings in the text -- most notable, that of Stonehenge, Rolle-rich stones of Oxfordshire; and some Roman tablets, altars and inscriptions. "Britannia" is a county-by-county description of Great Britain. It is a work of chorography: a study that relates landscape, geography, antiquarianism and history. Rather than write a history, Camden described in detail the Great Britain of the present, and attempted to delineate how the past could be discerned in the existing landscape. He thus produced the first coherent picture of Roman Britain. His circle of friends and acquaintances included Lord Burghley, Fulke Greville, Philip Sydney, Edmund Spencer, and Ben Jonson, the latter was Camden's student at Westminster, and who dedicated an early edition of "Every Man in His Humor" to him. SKELTON 117, WING C-359. Handwritten bookplate of Thomas Ansell, dated 1762, text and maps largely bright and clean, minor margin worming leaves Ffff-Mmmm, old repair upper corner of leaf Bb, Kent plate inverted, but overall a fresh and unsophisticated copy. (Inventory #: 18306)
$6,750.00 add to cart or Buy Direct from
Roy Young Bookseller
Share this item
Roy Young Bookseller, Inc.
Offered by