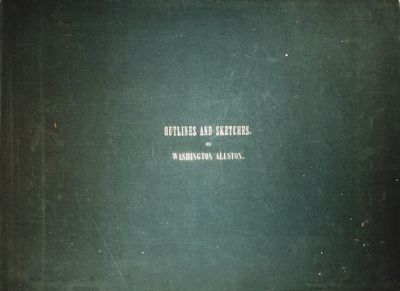 by Allston, Washington
Boston: Np, 1850. First edition. Hardcover. Orig. green cloth lettered in gilt. Very good. Oblong folio, 40 x 54 cm. Twenty engravings printed recto only with tissue guards, on eighteen sheets. Engraved by the brothers, John and Seth Wells Cheney who studied in Europe. Seth opened a studio in Boston in 1841, earned well-deserved acclaim and credit for having been practically the first among American artists to effectively work in black and white. [see: FIELDING, P.64]. Allston's sketches herein were a portion of those found after his death in Cambridge, Mass., July, 1843. They consist in great part of compositions, hastily sketched in chalk and never carried further. These adumbrations, a few in umber, on canvass, although carefully done, should not be considered finished outlines. Light to moderate foxing, all marginal not affecting images. Creasing to first two leaves of free endpapers, backstrip extremities worn with some loss at foot, binding very firm. (Inventory #: 15798)
$400.00 add to cart or Buy Direct from
Roy Young Bookseller
Share this item
Roy Young Bookseller, Inc.
Offered by

The History Of The Bucaniers of America