The Province of New Jersey, Divided into East and West, commonly called the Jerseys 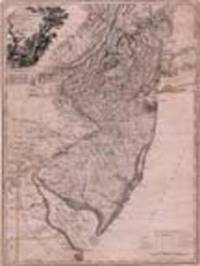 by RATZER, Bernard (fl. 1756-84) & William FADEN, (1750-1836)
London: Wm. Faden, 1777. Copper-engraved map, with original outline colour, on two joined sheets, in very good condition. The first state of one of the finest and most celebrated maps of New Jersey, made during the Revolutionary War.

This elegant composition depicts New Jersey in finely engraved detail at a large scale of 7 miles to an inch. The map was the grandest representation of the state made up to that time, taking in the entire breadth of the state, as well as the Hudson Valley, most of Long Island, eastern Pennsylvania and all of Delaware Bay. It captures the state's rich topography, including the Jersey Highlands and the Palisades in the north and the broad Pine Barrens and coastal marshes in the south. The county divisions, major roads and towns are all carefully depicted, indicating that New Jersey was, by the standards of the time, heavily populated, having over 120,000 inhabitants. Faden based his rendering of the state largely on the manuscript works of Bernard Ratzer, a British military surveyor most famous for his map of New York City. Ratzer's rendezvous with New Jersey cartography stemmed from the resolution of the bitter boundary dispute between that state and New York that had raged for over a century. In 1764, George III charged Samuel Holland and William De Brahm with settling the boundary, and their demarcation was finally surveyed by Ratzer in 1769. Ratzer's line is noted on the map as "The boundary settled by commissioners in 1769". Two of Ratzer's New Jersey manuscripts, one dealing with the boundary question, and another featuring Monmouth and Ocean Counties are today preserved in the Faden Collection at the Library of Congress. Faden supplemented Ratzer's work with surveys of the northern part of the state made by Gerard Bancker. Curiously, it seems that Bancker's work found its way to Faden, by way of John Murray, the Earl of Dunmore, the former governor of Virginia, who was given a draft by Bancker when he stopped in at New York on his way back to London. An interesting feature present on the map are the two lines bisecting the state, being the boundary lines between the archaic colonies of East and West Jersey. In 1664, Charles II granted the New Jersey charter jointly to Lord Berkeley and Sir George Carteret. Berkeley sold his share to John Fenwick, a Quaker who, in turn, passed it on to a consortium that included William Penn. The king elected to renew only Carteret's charter to the colony, and from 1676 the already small province was split into two awkward colonies. One of the lines present on this map is "Keith's Line" referring to the 1687 demarcation of the boundary by surveyor George Keith. While the two colonies were reunited under a royal governor in 1702, certain private land ownership questions predicated on the partition necessitated that an internal line of division persist, which was re-demarcated as the "Lawrence Line" in 1743. The map is embellished with a very fine cartouche, formed by trees framing a bucolic scene inhabited by farm houses and raccoons. The lower left of the map is adorned with a table of astrological observations. This copy is an excellent example of this important map, featuring a strong impression and good margins. In a careful original hand, New Jersey, and its internal boundaries have been outlined in pink, while surrounding jurisdictions are outlined in a yellow-green hue.