High Water in the Mississippi 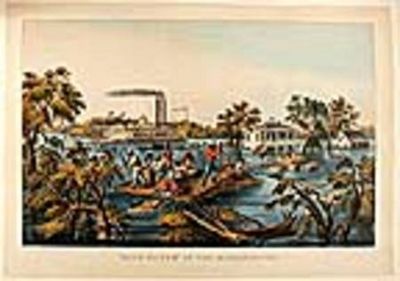 In the foreground, uprooted trees bob in the current, using a roof as a raft two men pole themselves and nine others to safety, one of their companions holds tight to reins of a mule swimming beside the roof, whilst two others rescue furniture and a barrel. In the mid-ground: a large white-painted house with second-floor balconies front and back, and a smaller cook-house off to the right side. Two men in a row boat approach the back of the house, a lady stands on the balcony speaking to the men; on the widow's walk on the roof a man and a woman stand: the man waves a handkerchief to the twin-stack riverboat. The riverboat, "Stonewall Jackson" is travelling at speed: the near-side paddle creates a substantial wake, the flags fly in the stiff breeze and the smoke from the stacks steams backwards: passengers line the rails attracted by the human drama they are passing. The overall impression is of a crisis that is being survived and dealt with by man's ingenuity, whilst life continues.