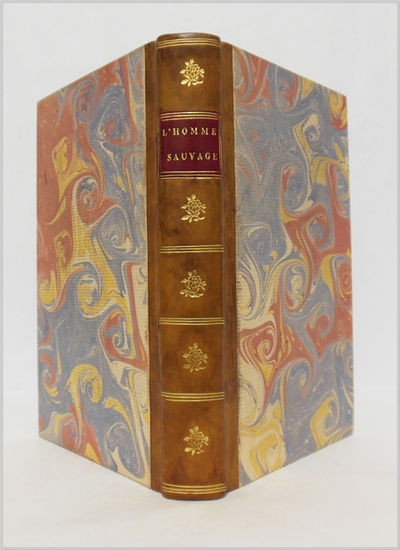 by Mercier, Louis-Sebastien
Neuchatel: De l'Imprimerie de la Societe Typographique, 1784. [4],314,[2]pp. Modern quarter calf and marbled boards, the half-title and leaf of ads bound in. Some very minor tanning, a few spots to fore-edge, otherwise a very good, crisp copy. Second edition, revised and enlarged, of this scarce novel. Originally published in 1767, and presented as a literal translation into French of Johann Gottlieb Benjamin Pfeil's utopian novel, DER WILDEMAN, the text is now presented as a work by Mercier himself (and is so treated by at least one bibliographer). This novel relates to events in the Americas, particularly among the CHEBUTOIS in Peru, colored by the ideas of Rousseau, et al., and the view of the "savage" man as the moral superior of the "civilized" man. Mercier was a prolific dramatist and romancier, best known for the widely reprinted L'AN DEUX MILLE QUATRE CENT QUARANTE ("Londres" 1771), which earned for him the appellation of "the father of the modern utopia" - Trousson. The advert. leaf is a subscription notice for an eight volume collected edition of his dramatic works. PALAU 165160. (Inventory #: WRCLIT58798)
$500.00 add to cart or Buy Direct from
William Reese Co. - Literature
Share this item

London : Chatto & Windus , 1952.
(click for more details about SANCTUARY)
View all from this seller>