The Arab crisis: why and how [printed with an endorsement from James Roosevelt] 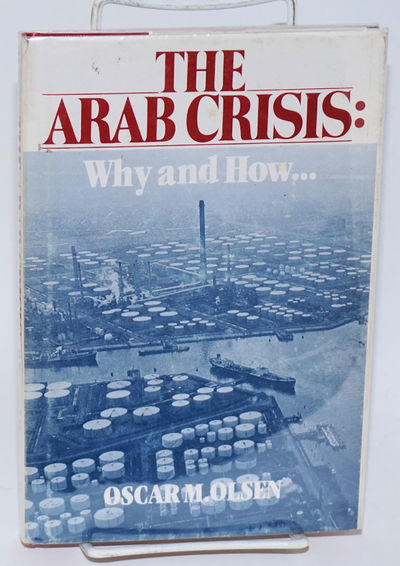 by Olsen, Oscar M.
New York: Vantage Press, 1981. xiv, 96p., first edition boards in photo-decorated dj with full-panel author portrait. Slightly shelfworn with one faint stain in text, jacket rubbed and edgeworn with several short tears (now protected in archival-grade brodart to size). Novelized expose, main character's name is Neslo, as in Olsen. According to dj vita Olsen has an engineering degree, worked in mining before joining major oil, quickly advanced to refinery superintendent, held management positions with independent oil refiners, at this writing lived in Oakland as a vice president of "one of the West's largest independents." Again from the dj, his thesis is that "the Arab oil crisis of 1973 was planned by the major American oil companies in order to quadruple the world price of oil. They also had as their ulterior motive to push forward plans to construct a major pipeline and develop the North Slope of Alaska." Neslo "finds himself engaged in carrying out The Plan. The Plan includes stirring up the Arabs, manipulating government officals in Washington, D.C., and bringing huge profits to the oil cartel at the expense of the American people." // James Roosevelt's endorsing letter (printed over his signature in the plate, about 90 words) says Olsen "has developed this interesting hypothesis in what I find to be an orderly, plausible manner (Inventory #: 121173)
$20.00 add to cart or Buy Direct from Bolerium Books
Share this item