Remarks Made on a Tour to Prairie du Chien; thence to Washington City, in 1829 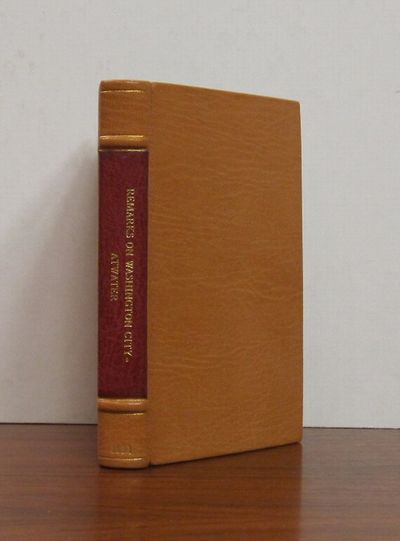 by ATWATER, Caleb
Columbus: Isaac N. Whitting, 1831. First. hardcover. [3], vi-vii, [blank], [1], 1, 296pp. (untrimmed pages are uniformly toned). 12mo, rebound in full beige morocco; burgundy leather spine label, lettered in gilt. Columbus, O: Isaac N. Whitting, 1831. First edition. "Nothing indicating the mission of Atwater appears on the title, yet the real object of the tour was to procure as Commissioner of the government, a cession of the title of the Winnebago, Potawatomi, Chippewa, and Ottawa Indians in the rich mineral lands, now forming the State of Wisconsin and part of Illinois. Much the greater part of the work is devoted therefore to a narration of the peculiarities of those tribes which he visited, biography of some of their cheifs, Indian poetry, specimens of their language, and incidents of his associations with them". -Field 54. Atwater was "a social and intellectual pioneer of the Middle West, and perhaps the first advocate of forest conservation; he was one of the first to predict the success of the railway, the first historian of his state [Ohio] and the founder of its school system". -DAB; ; Howes A379; Sabin 2335. (Inventory #: 157321)
$1,250.00 add to cart or Buy Direct from
Argosy Book Store
Share this item