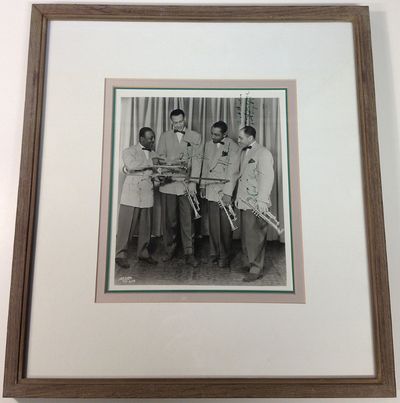 by (HAMPTON, Lionel)
New York, 1942. unbound. Rare vintage 10 x 8-inch black-and-white publicity photo of the brass section featured with Lionel Hampton and His Orchestra, including trumpeters Ernest Royal (b. 1921), Joe Newman (b. 1921), Karl George (b. 1913), and trombonist Henry Sloan. The four are standing in a row looking at Sloan's trombone, wearing bow-ties and dinner jackets. Each of the four musicians has signed his name over his picture. George has signed a second time at the upper right: "Best wishes, Karl George, 1st Trpt." Triple-matted in white, lavender, and green, with a gray wooden frame measuring 17.5 x 16 inches. New York, no date, circa 1942. Near fine condition. (Inventory #: 122643)
$500.00 add to cart or Buy Direct from
Argosy Book Store
Share this item