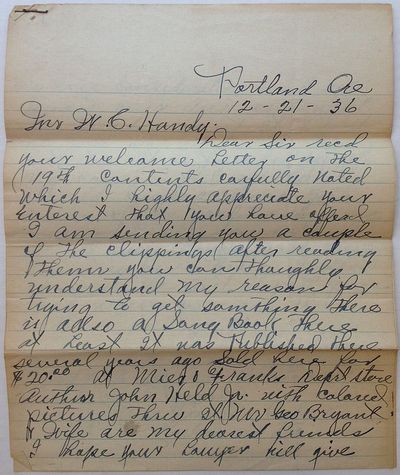 by FRANKIE & JOHNNY
1930. unbound. Collection of items related to the folk song "Frankie and Johnny," upon which the Mae West movie "She Done Him Wrong" was based. Includes an autographed letter signed from Frankie Baker (1877-1952) -- who claimed in a 1939 lawsuit against Republic Pictures to have been the Frankie upon whom the song was based -- to composer W.C. Handy, seeking support for her claim. 2 pages on lined paper, 10 x 8 inches, Portland, Oregon, December 21, 1936. An attached unsigned typed note from Handy refers the matter to his attorney; 1 page, 6 x 4 inches, no place, January 16, 1937. Also included is a typed letter to Handy from Baker's friend George Bryant,1 page, 11 x 8.5 inches, Omaha, December 10, 1936, paperclip stain near the top, partial tears at the edges and along the horizontal folds. Also included is a typed letter signed to Handy's attorney from music publisher Elliott Shapiro, 1 page on "Shapiro, Bernstain & Co. Music Publishers" letterhead, 11 x 8.5 inches, New York, April 2, 1940, partial tearing along the horizontal folds. Also included are two pages of legal notes and several newspaper clippings. Very good(-) condition. "...I highly appreciate your interest that you have offered. I am sending you a couple of the clippings. After reading them you can thoughly [sic] understand my reason for trying to get something. There is also a song book...I don't know just who stated the song but know it is founded off of my case. I feel as though I should have a share in some of the profits..." Accompanied by a copy of the play "Frankie and Johnny" by John Huston. Illustrations, 160 pages, decorative endpapers, 8vo, red cloth with black and gilt lettering (spine chipped, inner hinge weak). New York: Albert & Charles Boni, (1930), first edition. Signed on the title page: "To Abbie Miles, Thanks! John Huston, 1930." (Inventory #: 82876)
$650.00 add to cart or Buy Direct from
Argosy Book Store
Share this item

To The Honourable the Court of Directors of the United Company of Merchants Trading to the East Indies, Steel's New Chart of the Indian and Pacific Oceans;; from the Cape of Good Hope to Canton and New Zeeland: Including all the Passage to India and China

London : J.W. Norie , 1822
(click for more details about To The Honourable the Court of Directors of the United Company of Merchants Trading to the East Indies, Steel's New Chart of the Indian and Pacific Oceans;; from the Cape of Good Hope to Canton and New Zeeland: Including all the Passage to India and China)