The Storm! A journal for free spirits. #9-10. Special double issue 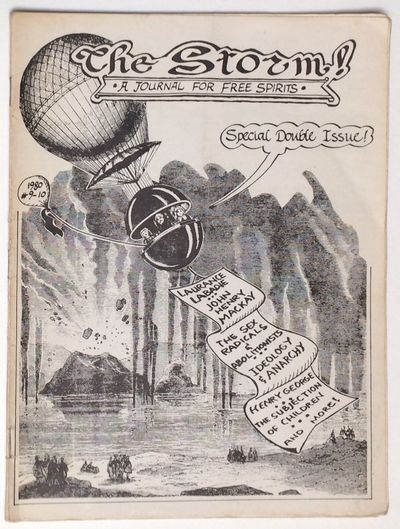 New York: The Mackay Society, 1980. 28p. 6.25x8.25 inches, illustrations, stapled pictorial wraps. Minor toning and handling, very good. With articles on Jo Labadie and John Henry Mackay, sex radicals and abolitionists, and more. As stated in this issue, "The purpose of The Storm has been from the beginning to explore and advocate anarchy - life without compulsory authority. In the execution of this purpose, we have criticized authority as it is embodied in the corporate-state and as it manifests within the various counter-movements of anarchism, libertarianism, and gay liberation. We have also looked back to those whose lives exemplified anarchy in action: Emma Goldman, John Henry Mackay, Thoreau, the European Egoists, and Voltairine de Cleyre.". (Inventory #: 123261)
$25.00 add to cart or Buy Direct from Bolerium Books
Share this item