FOR WHOM THE BELL TOLLS 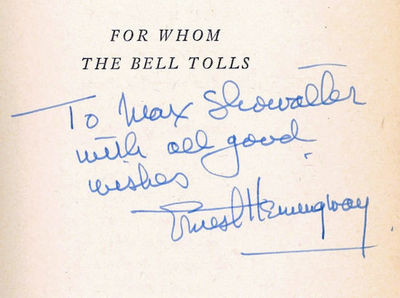 by Hemingway, Ernest
New York: Chas. Scribner's Sons, 1940. Cloth. Spine somewhat rubbed and darkened, a bit tanned and a trifle shaken, but a sound copy. Later printing of the first edition (without the 'A'). Inscribed by Hemingway on the half- title: "To Max Showalter with all good wishes Ernest Hemingway." Accompanied by two other items: a) another copy, first printing, bearing Max Showalter's ownership signature on the free endsheet (endsheets darkened at gutters, else very good, in defective, but largely complete, dust jacket); and b) Mary Hemingway's HOW IT WAS (New York: Knopf, 1976), first edition, near fine in very good dust jacket, inscribed by Mary Hemingway to Showalter in Los Angeles in the year of publication. Showalter (a.k.a. Casey Adams) enjoyed a long career in film and television, and was a feature player at 20th Century Fox favored by Darryl Zanuck, who required Showalter's assumption of the 'Adams' stage name. Though he was associated with a long list of films and television programs from the 1940s-1980s, we find no record of his credited association with a film adaptation of Hemingway's work. He did, however, originate the role of Ward Cleaver (the Beaver's old man), which later passed to Hugh Beaumont. (Inventory #: WRCLIT50601)
$5,500.00 add to cart or Buy Direct from
William Reese Co. - Literature
Share this item