MEMORIALS OF A TOUR ON THE CONTINENT, 1820 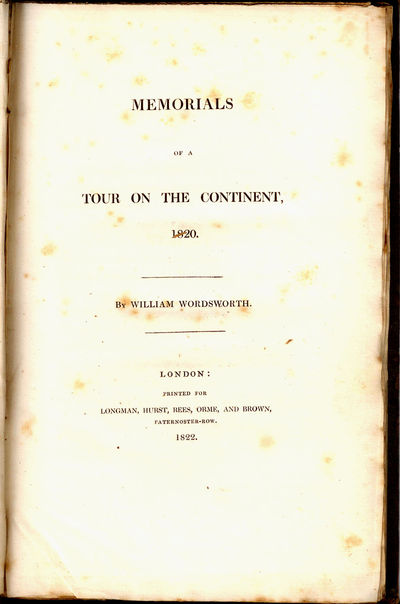 by WORDSWORTH, William
London: Longman, Hurst, Rees, Orme and Brown, 1822. First Edition. Tall 8vo, pp. viii, 103 + 4pp of adv, dated March, 1822. Untrimmed and bound with the half-title, in contemporary boards, rebacked with later cloth and leather label. Contemporary ownership signature of Hannah Hoare. Healey, Cornell Wordsworth Collection 70; Wise pp.25-26). One of Wordsworth's scarcer titles. The text begins with thirty-five short autobiographical poems, mostly sonnets, followed by two longer poems: 'To Enterprise' and 'Desultry Stanzas'. "In 1820, Wordsworth made a four months' tour with his wife and sister and other friends up the Rhine to Switzerland, met Robinson at Lucerne, and after visiting the Italian lakes, returned to Paris.[DNB, vol. 63, p. 22. (Inventory #: 41398)
$1,375.00 add to cart or Buy Direct from
Second Life Books
Share this item