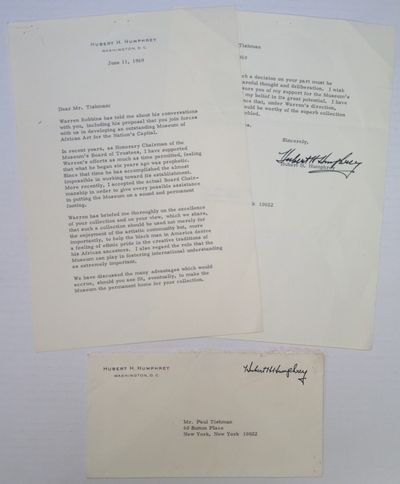 by HUMPHREY, Hubert (1911 - 1978)
Washington, D.C., 1969. unbound. 2 pages on personal embossed stationery, 10.5 x 7.25 inches, with original free-franked envelope, Washington, D.C., June 11, 1969. Written to a prominent art collector concerning The Museum of African Art for the Nation's Capital, in part: "In recent years, as Honorary Chairman of the Museum's Board of Trustees, I have supported Warren's efforts as much as time permitted, feeling that what he began six years ago was prophetic..." Natural folds; staple holes in the top margin. Very good(-) condition. (Inventory #: 201188)
$125.00 add to cart or Buy Direct from
Argosy Book Store
Share this item