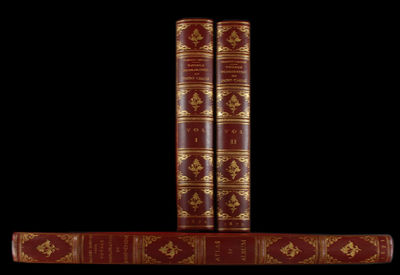 Rare complete set of the first edition of the official printed record of the most important 19th-century exploratory expedition into Indochina.

This first edition was limited to just 300 copies. The maps are after Garnier himself, whilst the views are taken from sketches by the expedition artist Louis Delaporte. These views, in conjunction with the fine illustrations in the text volumes, form a valuable and remarkably wide-ranging visual record of Indochina as a whole, with the depictions of the ancient capital of Laos at Viet Chan and Angkor in Cambodia being particularly impressive. Garnier was part of the French expedition under Captain Ernest Doudard de Lagrée which set out from Saigon in 1866 to explore the valley of the Mekong River in the hopes of finding a navigable route into south-western China. Garnier took command of the mission when de Lagrée died and he safely led the expedition to the Chinese coast via the Yangtze River. The expedition traversed almost 5,400 miles travelling through Vietnam, Cambodia, and Laos, mapping over 3,600 miles of terrain previously unknown to Europeans, and becoming the first westerners to enter Yunnan by a southern route. Subsequently, Garnier returned to France a hero, fought in the Franco-Prussian war, and finished the present account of the expedition before eventually returning to Indo-China to establish a colony in Tonkin.