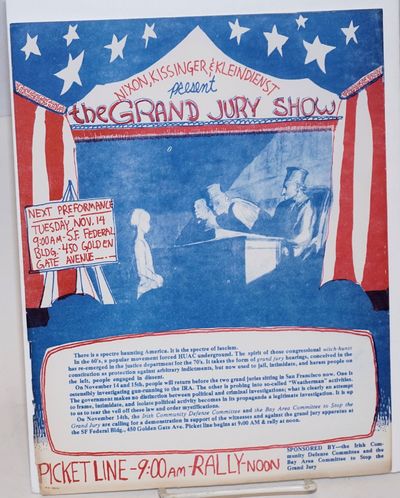 San Francisco: Bay Area Committee to Stop the Grand Jury, Irish Community Defense Committee, 1972. Red, white and blue handbill, 8.5x12 inches, small area of browning along edge, minor chipping else very good condition. Inquisitorial judges lean toward a hapless defendant on a stage, framed by curtains resembling American flags. Calls for a rally at the San Francisco Federal Building on November 14 to support witnesses called before grand juries; one case is related to the Weather Underground while the other is an investigation into gun-running for the IRA. Flyer states that after the decline of HUAC, the justice department has taken on the mantle of "witch-hunts" by using grand jury hearings to "jail, intimidate and harass people on the left (Inventory #: 124011)
$15.00 add to cart or Buy Direct from Bolerium Books
Share this item