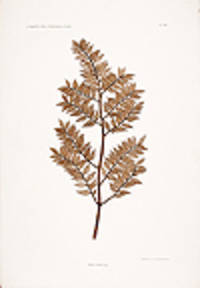 To the modern eye this plate has an almost photographic beauty to it, which, in aesthetic terms, foreshadows the work of the great early-20th century photographers such as Man Ray. However, this achievement is almost certainly incidental as von Ettingshausen's intention was to present a detailed anatomical portrait using the highly exacting method of nature printing. John Lindley writes "Attempts were long since made to obtain Botanical portraits by printing from the plants themselves, flattened and otherwise prepared for the purpose... The process of the Imperial Printing Office [Hof- und Staatsdruckerei] at Vienna, to which the name of Nature-Printing has been happily applied.. is a great improvement upon the old method, inasmuch as it represents not only general form with absolute accuracy, but also surface, hairs, veins, and other minutiae of superficial structure by which plants are known irrespective of the hidden details of their hidden organization. Moreover, an exact copy in copper of the part to be represented being employed by the printer, instead of so fragile an object as the plant itself, we obtain the means of multiplying copies to the same extent as in copperplate engraving; and hence the method becomes suitable for purposes of publication." (Preface of 'The Ferns of Great Britain and Ireland... Edited by John Lindley... Nature-printed by Henry Bradbury') . The present plate was printed under the supervision of Alois Auer, the inventor of the nature printing process, at the Vienna state press. Von Ettingshausen, an Austrian botanist, palaeontologist and mineralogist, was a keen supporter of nature printing and published a number of other works using the process (the Bradley Bibliography lists 24 titles under his name). Pokorny worked with von Ettingshausen to improve the quality of nature printing and worked as a teacher and lecturer at various establishments in Vienna, lecturing on phytogeography at the university from 1857-1868.

An American Four-In-Hand in Britain