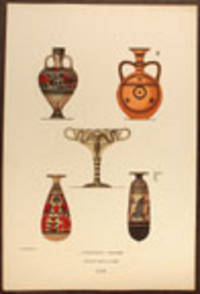 The revival of interest in Greek ceramics was led by the travellers and cogniscenti who visited Greece and southern Italy in the mid to late-18th century. The Greek vase as an art form was first brought to the attention of an appreciative wider audience with the publication of a number of well-illustrated works on the collections of these dilletants. The most notable of this group was Sir William Hamilton (1730-1803), whose collection catalogue was published over a number of years starting in 1769. However, these early pioneers, working with a relatively small number of examples and using primitive techniques, were only able to begin to piece together the intricate story of this unique art form. It was not until a century later that art historians felt that they were understood the full scope and history of ancient Greek ceramics in general and the superb work produced using the red-figure technique in particular. The red-figure technique first came into use in about 530 B.C. and was the dominant type by about 500 B.C. With this technique, images are traced in outline and the background filled in with black glaze. Details are then drawn in by the painter with a black or brownish glaze. Red figure vases continued to be produced in Athens until about 320 B.C. Genick was one of the leading authorities of his day on the red-figure vases: an architect by training, he had a passionate love for and deep understanding of this great Athenian pottery. His study, brought to realization by Wasmuth's superb chromolithographs, illustrates for the first time these masterpieces of the potter's life-size art. (Inventory #: 21042)
$950.00 add to cart or Buy Direct from
Donald A. Heald Rare Books
Share this item
Donald A. Heald Rare Books
Offered by