THE REPORT OF THE RT. HONBLE. THE HOUSE OF LORDS OF GREAT BRITAIN, BEING THE WHOLE TRYAL AND CONFESSION OF WILLIAM GREGG, WITH AFFIDAVITS & EXAMINATIONS OF MANY PERSONS... 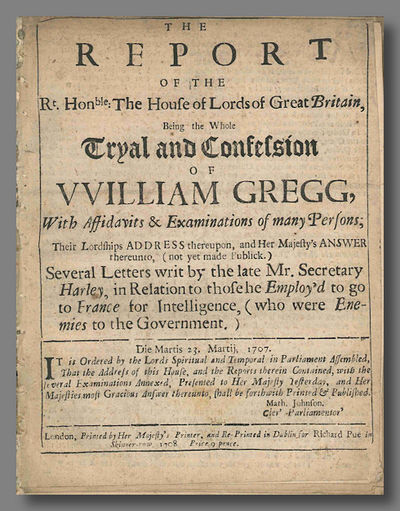 by [Gregg, William]
London, Printed...and Re-Printed in Dublin: for Richard Pue, 1708. 36pp. Quarto (in 2s). Extracted from bound volume. Crudely printed, and trimmed a bit close, costing a few page numbers, and several words on three leaves, a bit darkened; good. First Dublin printing. A notorious case: Gregg was appointed by Harley to an underclerkship, and when it was found that some state papers had been sent to a French minister, accompanied by a cover note from Gregg, he was charged and imprisoned. In hopes of incriminating Harley in the matter, the House of Lords sent a committee to Gregg in Newgate and offered him clemency if he'd confess that Harley had been involved. Gregg refused to implicate Harley, and the committee allowed him to wait in suspense for three months. He was finally hanged and quartered, and his statement and demeanor before the noose was honorable. Scarce (ESTC locates only six copies), but w.a.f. ESTC T134416. (Inventory #: WRCLIT42921)
$150.00 add to cart or Buy Direct from
William Reese Co. - Literature
Share this item

SOME PERSONAL LETTERS OF HERMAN MELVILLE AND A BIBLIOGRAPHY

New York, New Haven and Princeton : Brick Row Book Shop , 1922
(click for more details about SOME PERSONAL LETTERS OF HERMAN MELVILLE AND A BIBLIOGRAPHY)
View all from this seller>