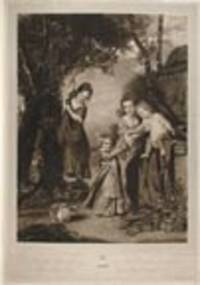 by REYNOLDS, After Sir Joshua (1723-1792). - Charles TURNER (1773-1857), engraver
London, 1819. Mezzotint over an engraved and etched base, by Turner after Reynolds. Sheet size: 24 9/16 x 17 inches. In good condition. Trimmed to edge of plate mark, small expertly repaired tears at sheet edges. A charming image, from the golden age of the British mezzotint, of the grand-children of William Penn, the founder and first proprietor of the colony of Pennsylvania.

This fine group portrait shows the children of Thomas Penn (1702-1775) and his wife Lady Juliana, daughter of Thomas Fermor, the first Earl of Pomfret. The print is dedicated by Turner in 1819 to John Penn, who is included in the portrait as a young child: "This print of the Penn Family is with Permission dedicated to John Penn Esqr,. By his obliged & humble Servt. C. Turner". Just beneath the image are the names and dates of the four subjects: two of whom, John's mother and older sister, had died by the time the print was issued, thus making it a touching memorial, and an emblem of family life as seen from childhood in general. Sir Joshua Reynolds executed the original portrait in the early 1760s when he was at the height of his considerable powers as a Society portrait painter. Charles Turner was an excellent engraver who throughout his memorable career produced an array of wonderful images. Born in Oxfordshire, Turner moved to London in 1795, at which time he was employed by the famous engraver and publisher Boydell. Turner was a versatile engraver working in stipple and aquatint as well as mezzotint. Although, Turner produced a wide array of excellent prints on subjects ranging from topography to genre, his main artistic focus was portraiture. Throughout his career he produced more than six hundred plates, of which about two-thirds were portraits. Turner was a close friend of JMW Turner, and engraved many of the artists' paintings, in addition to engraving some of the plates for 'Liber Studiorum'. As an engraver he combined technical skill with artistic imagination to create beautiful enduring images.