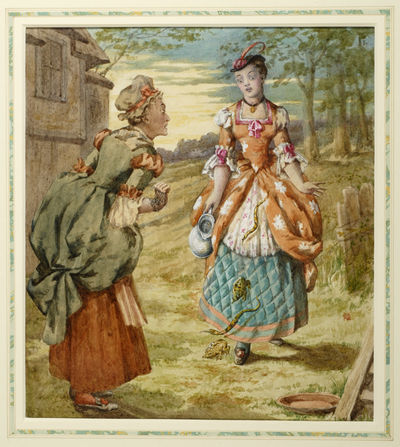 This fantastically vivid and full watercolor drawing, from the artist very early on in her career, depicts a young woman holding in her right hand a large silver tankard and looking somewhat horrified as two huge frogs and two snakes jump and slither out of her mouth. An old woman who is facing her, is in fact a fairy who has cast a spell on the girl. She had put the girl to a test to see if she would be kind and obliging, but unfortunately the girl failed the test miserably and the outcome, as we can see, resulted in toads and vipers falling from her lips every time she speaks. Therein, surely lies a lesson to be learnt!

"She had no sooner reached the fountain, than a lady most magnificently dressed came out of the woodland path, and asked Fanny to give her some water. This was the same Fairy who had before appeared as a poor old woman; and she came for the same purpose, that was, to try whether the young girl was kind and obliging; but lest she should only pretend goodness in order to gain the precious gift, the Fairy appeared in a different form.

"I did not come here to draw water for strangers," said Fanny, scornfully; "I suppose you think the best silver tankard was brought on purpose for your ladyship! However you may drink out of it if you have a fancy."

"You are not very obliging," said the Fairy; "and since you have behaved with so little civility, I will bestow a gift on you which shall be your punishment. Every time you speak, there shall drop from you lips a viper or a toad." Having said these words she disappeared; and Fanny went home very sullen and angry." (Diamonds and Toads).

"In 1869 Kate began an important illustration commission - six watercolour designs for Diamonds and Toads, a children's toybook published by Frederick Warne. She used her eighteen-year-old sister Fanny as a model, (let's hope she modeled the younger woman in this watercolor on Fanny and not the older one !!) and took over a year to complete her most ambitious project to date...She earned £36 from the colour printer, Kronheim, for her watercolour designs for Diamonds and Toads.

Kate's sister, Fanny married a distant cousin who came from the notorious Dadd family (Richard Dadd had killed his father and lived out his life in a home for the criminally insane and another uncle and his sister had suffered similar illnesses). It seems highly likely that Kate found Richard Dadd's work attractive for his fairies and gnomes published in S.C. Hall's Book of British Ballads (1842) were in a style she had long admired. Moreover, two years after Fanny's marriage into the Dadd family, there was still interest in Richard's work, despite his lengthy confinement... It is interesting to consider Richard Dadd's influence on Kate's early work. For example, a comparison between Richard's 'Passion Series' watercolours of the mid-1850s and Kate's watercolour drawings for Diamonds and Toads, published fifteen years later, is quite revealing. There is a startling similarity of technique, as in the grotesque facial expressions and wide, frightening eyes emphasized by firm outlines. The work of both throughout this period is marked by the continual presence of witches and demonic gnomes. In addition, could Kate perhaps have had Richard in mind when she wrote the following maxims in a notebook found among her papers? 'Great wits to madness sure are near allied, of thin partitions do their bounds divide...Scandal will rub out like dirt when it is dry...There's a skeleton in every house'".

"If ever there was a beautiful soul, it was the soul of Kate Greenaway".

The New Whole Duty of Man

London: Printed for W. Bent, 1833
(click for more details about The New Whole Duty of Man)

Paris: E Prelis Fratrum Mame, 1808
(click for more details about Carmina)
View all from this seller>