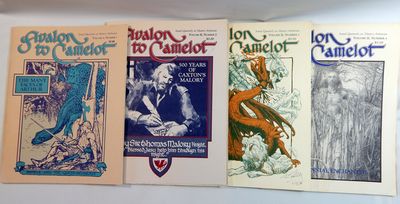 by Lambides, Freya Reeves, publ; Tim Solliday
Evanston, IL: Freya Reeves Lambides, 1987. First edition. Stapled wraps. Near fine. Volume II, Numbers 1-4, a complete set of the second volume of this Arthurian Quarterly. Number 1 focuses on Merlin; Number 2 celebrates 500 years of Caxton's Malory, and also an essay on Lancelot. Number 4's theme is: The Many Faces of Arthur. Volume II, Number 3, has a cover with a drawing of an incident in Cretien's Yvain. Yvain rescued a lion from a venomous dragon. The lion became Yvain's steadfast ally and companion. The drawing for the cover was done by Tim Solliday who has become a well known California Plein Air Artist. The cover bear's Tim's original signature dated June 18, 1988. A wonderful item for either the King Arthur collector of the Tim Solliday collector. The set has light soil and traces of aging but is in near fine condition. (Inventory #: 17096)
$500.00 add to cart or Buy Direct from Thorn Books
Share this item

London : Henry Lintot and John Osborn , 1746
(click for more details about A Discovery of Two Forreigne Sects in the East-Indies, Viz., The Sect of the Banians, the Ancient Natives of India, and the Sect of the Persees, the Ancient Inhabitants of Persia)
View all from this seller>