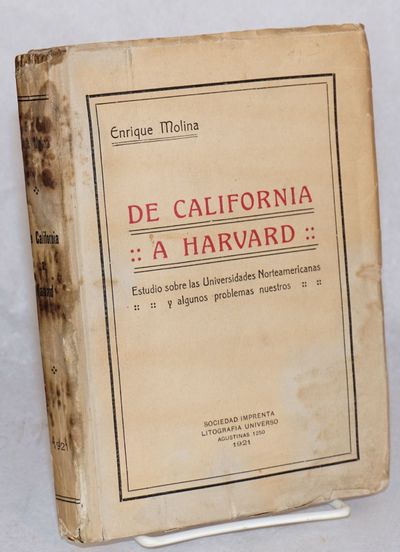 by Molina, Enrique
Santiago de Chile: Soc. Imp. y Lit. Universo, 1921. 315p., 7.5x5.5 inch plain printed wraps with rubricated title. The spine-panel is darkly stained in three areas, obviously staples are rusting beneath the printed paper and the effect is quite repulsive. Expect general wear as well. This copy is Inscribed by author Molina, a Chilean academic, who traveled to the US for the 8th Pan American Scientific Congress, and spent time in New York thereafter. A brief survey of California universities (beginning with UC Berkeley and Stanford) occupies chapter one. His east coast experiences are thoroughly described. (Inventory #: 118339)
$25.00 add to cart or Buy Direct from Bolerium Books
Share this item

Against Interpretation and other essays

New York : Farrar , Straus and Giroux/Noonday Press , 1966
(click for more details about Against Interpretation and other essays)

Denver, CO : Francis D. Tandy, Publisher , 1896
(click for more details about Voluntary socialism, a sketch)
View all from this seller>