A SKETCH OF OLD ENGLAND, BY A NEW ENGLAND MAN 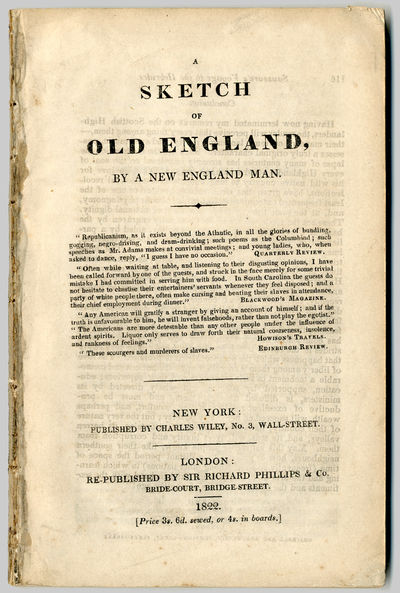 by [Paulding, James K.]
London: Sir Richard Phillips & Co., 1822. 136pp. Extracted from bound volume. A few corners lightly creased, light offset to title from its previous neighbor, but a very good copy. First British edition, published in the same year as the New York edition, of Paulding's highly popular (in America at least), and vicious, send-down of Britain, its people and its custom, based on his reading rather than contemporaneous observation. His comments on British book collectors are interesting, if somewhat uncharitable: "Another characteristic feature of the present school of English literature is, the incredible appetite for black letter books, and old trash of every sort, which derives its sole value from its scarcity. More than one nobleman here, owe all the eclat they enjoy...to their munificence in patronising old authors and printers, who have been dead for centuries. The worse a book is printed, and the more ridiculously quaint its title, the more they will give for the treasure...." He continues with a rather jaundiced account of the sale of the Duke of Roxburgh's library. For the occasion of this British printing, four rather disparaging (if nonetheless accurate) quotations about Americans were dug up from the public press to adorn the title. BAL, uncharacteristically, does not note this edition in the subnote to the title's primary entry (15696), though the NUC locates six copies. Copies were available "3s.6d. sewed, or 4s. in boards." (Inventory #: WRCLIT21139)
$175.00 add to cart or Buy Direct from
William Reese Co. - Literature
Share this item

Harmondsworth : Penguin Books , [1938].
(click for more details about TYPEE NARRATIVE OF A FOUR MONTHS' RESIDENCE AMONG THE NATIVES OF A VALLEY OF THE MARQUESAS ISLANDS)
View all from this seller>