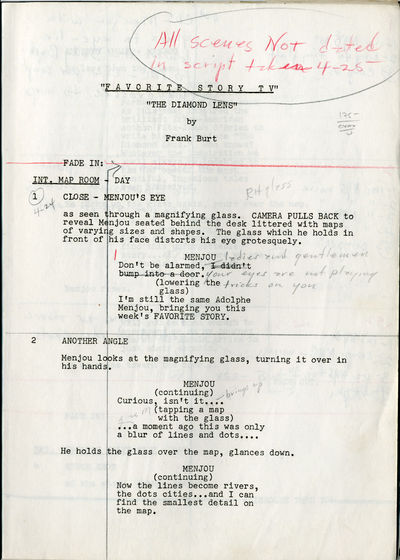 by [O'Brien, Fitz-James (source work)]: Burt, Frank [screenwriter]
Hollywood: ZIV Television Programs, Inc., 1953. 43 leaves plus a few lettered inserts. Quarto. Mimeographed typescript, printed on rectos only, with revises on blue paper. Bradbound in printed wrappers. Extensively worked over throughout in pencil and colored pencil in the course of the production, a couple light stains to the front wrapper, else very good. An early adaptation to television of O'Brien's best-known short story, one of the classics of 19th century proto-science fiction. This script was utilized in the production, and is extensively annotated and revised throughout in pencil and colored pencil on the recto and verso of every sheet. Uncommon. BLEILER, p.149. (Inventory #: WRCLIT32739)
$175.00 add to cart or Buy Direct from
William Reese Co. - Literature
Share this item