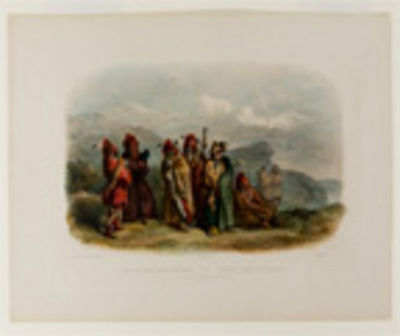 by BODMER, Karl (1809-1893)
[Leipzig: Schmidt and Guenther, 1922. Aquatint engraving by L. Weber after Bodmer. From the scarce Leipzig edition printed from the original copper-plates. Limited in number, the prints from the Leipzig edition are more scarce than, and compare favorably to, the first edition. (David C. Hunt, "Karl Bodmer and the American Frontier," Imprint/Spring 85, p.18)

Bodmer first encountered the Sauk (or Sac) and Fox (Mesquaki or Muskwaki) Indians in St.Louis in March of 1833. A group had come to plead for the release of Chief Black Hawk who had engaged in a series of running battles with the US army which had ended in his defeat and capture on 3 August 1832. Bodmer pictures this alert but wary group as they await a decision from the government. All are shown with a crestlike ornament made of stiff deer hair on their heads (some with an inserted feather indicating success in battle). Most carry weapons: a stone-headed club, a musket, a musket-stock axe or a spear. Following a bloody defeat by the French in 1730, the Fox united with their kinsmen the Sauk, and made peace with the French in 1740. By the time of Bodmer's visit their territory was largely between Lake Michigan and the upper reaches of the Mississippi river. Their eventual relocation to the plains released the last hold the Indians had on the Northeastern lands. Karl Bodmer's images show great versatility and technical virtuosity and give us a uniquely accomplished and detailed picture of a previously little understood (and soon to vanish) way of life. Swiss-born Bodmer was engaged by Prince Maximilian zu Wied-Neuwied (1782-1867) specifically to provide a record of his travels in North America, principally among the Plains Indians. In the company of David Dreidoppel (Prince Maximilian's servant and hunting companion), their travels in North America were to last from 1832 to 1834. They arrived in Boston in July 1832, traveled on to Philadelphia, where they stayed with Napoleon Bonaparte's elder brother Joseph. From here they headed west across Pennsylvania across the Alleghenies to Pittsburgh and the Ohio country, visiting all the important German settlements en route. Their most important stop on their route west was at the utopian colony of New Harmony in Indiana. The Prince spent five months there in the company of some of the country's leading scientific men, and studying all the relevant literature on backcountry America. On 24 March 1833 the party reached St. Louis, Missouri, and the start of the journey into Indian country.