To Trap a Savage 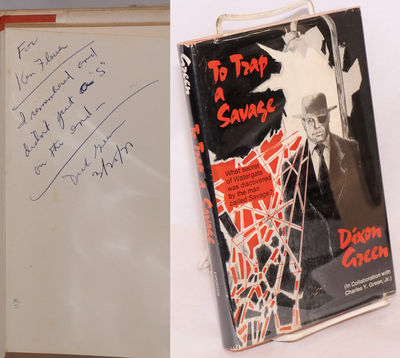 by Green, Dixon, in collaboration with Charles Y. Green, Jr.
Hicksville: Exposition Press, 1977. v, 150p., first edition cloth boards in dj. Mild lower edge shelfwear, text edges faintly foxed, the unclipped jacket is a bit soiled. Bears an inscription, signed, from Dixon. Protagonist 'Savage,' a Comanche, is a C.I.A. assassin being stalked by fellow assassins. Episodes seem competently visualized and are executed in competent prose. The sole notable detail here is that the second author (find photoportraits of both guys on the dj) is thoroughly the real thing. Charles Green joined in 1949, was "a senior intelligence duty officer to the Director [under Dulles we may suppose] and from 1962 to 1974 was the senior C.I.A. representative to the Chairman of the Joint Chiefs of Staff and the Secretary of Defense." In this text, when an Agency storeroom is described the description is probably quite accurate. (Inventory #: 125685)
$15.00 add to cart or Buy Direct from Bolerium Books
Share this item