AN IMPARTIAL SKETCH OF THE DEBATE IN THE HOUSE OF COMMONS OF IRELAND, ON THE MOTION MADE ON FRIDAY, AUGUST 12, 1785, BY THE RT. HON. THOMAS ORDE, SECRETARY TO THE RT. HON. CHARLES MANNERS...FOR LEAVE TO BRING IN A BILL FOR EFFECTUATING THE INTERCOURSE AND COMMERCE BETWEEN GREAT BRITAIN AND IRELAND, ON PERMANENT AND EQUITABLE PRINCIPLES, FOR THE MUTUAL BENEFIT OF BOTH COUNTRIES... 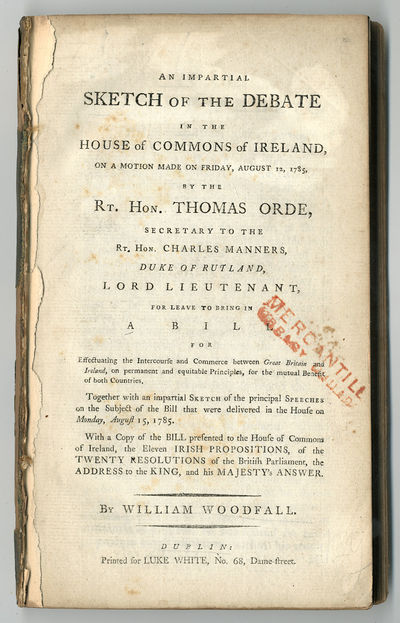 by Woodfall, William
Dublin: Printed for Luke White, No. 68 [sic], Dame- Street, 1785. [2],ii,200,24pp. Octavo. Extracted from binding. Old stamp of a defunct mercantile library, a few marginal smudges, title and terminal leaf a bit dusty, but a very good copy. The errata slip reported in ESTC is not present. First Dublin printing, first variant (of 3) of the imprint and title-text. ESTC suggests that the various London "editions" are likely related to the same setting as this printing. A copy of the bill, separately printed, is appended. Woodfall "is said to have visited Dublin by invitation in 1784 to report the debates on the 'commercial propositions' (Nichols, Lit. Anecd. i. 303). His reporting was an effort of memory; he listened to a speech and then committed to paper a remarkably accurate version of it. His fame had preceded him, and crowds followed him in the streets of Dublin because he was supposed to be 'endowed with supernatural powers.' Nichols records that Woodfall's report was printed and prepared for sale as a pamphlet, and that 'not more than three copies were ever called for" - DNB. The last observation perhaps explains the efforts to market sheets under the London imprints, although the extraordinary abundance of copies reported in OCLC suggests some measure of circulation occurred. ESTC N16791. KRESS B984. GOLDSMITHS 12965. BLACK 1433. BRADSHAW 2149. (Inventory #: WRCLIT52299)
$175.00 add to cart or Buy Direct from
William Reese Co. - Literature
Share this item