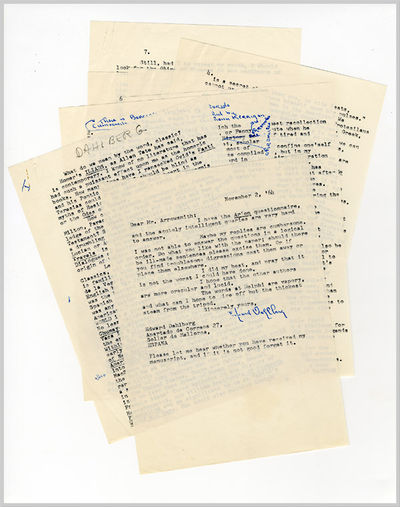 by Dahlberg, Edward
Mallorca, Spain, 1964. Six and one half closely typed octavo pages, plus covering t.l.s., as well as a relatively clean typescript, 7 leaves, probably secretarial, of a revised draft. Fine. Addressed to William Arrowsmith, in response to a questionnaire for ARION magazine. Discursive, vintage Dahlberg, in response to the query "What do we mean by the word 'classic'?" Dahlberg holds forth on the value and necessity of a knowledge of the classics, while unhesitatingly pointing to new classics, as well as to the merits and demerits of the works of his contemporaries: Pound, Tate, Bourne, Herbst, Eliot, Murray, et al. He continues in response to queries about the nature of education, teachers, etc. He sums up: "Still, had I to repeat my youth, I should look for the Olive of Minerva in our pantheons of learning...The American college is no cloister...Spite of natural human error, and the influence of the Mammon literary agora, it is conceivable that our Thoreaus, Melvilles and Poes will not be obscure wraiths in our own day...The parables are more important than the raiment and the meat; for the poet can somehow endure indigence but not the neglect of his books." Six of the seven pages of the response bear manuscript insertions and corrections, some very substantial. The second typescript, also 7pp. is relatively clean and incorporates Dahlberg's revisions as evident in the worked over text of the earlier draft. It was typed on a different typewriter, and may have been prepared by a staff member of ARION. Published as Billings C108. (Inventory #: WRCLIT17259)
$550.00 add to cart or Buy Direct from
William Reese Co. - Literature
Share this item