The tragicall historie of the Tapioca Misanthropa; as it hath bene acted with great applause and contayning the Dark Conceits of Sir John Fall-Stab with the Humours devices of the Clown Tetched Stoned and with arguments concerning the plight of Mankind in general; a play in two acts 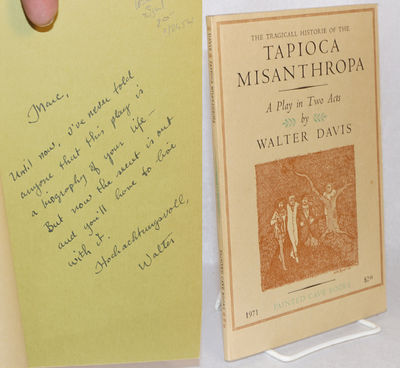 by Davis, Walter
Santa Barbara [actually Carpenteria]: Painted Cave Books, 1971. Paperback. 60p., preface, illustrated with woodcuts and production stills, very pretty softbound its cover and titlepage printed in three colors, two colors at chapter dividers, a very good limited edition of 800 copies, in pictorial letterpress wraps. Personal inscription signed by the author. A "punning play" based on T.S. Eliot and Shakespeare which was produced at UC Santa Barbara and eventually as a televised play on KCET. Puns and initial-letter repitition as in ye old times. Preface confesses that "psychologists tell us that punning is often an act of aggression," and the elaborate holograph inscription confesses even more along that line: "Marc, / Until now, I've never told anyone that this play is a biography of your life - But now the secret is out and you'll have to live with it. / Walter (Inventory #: 126561)
$15.00 add to cart or Buy Direct from Bolerium Books
Share this item